Google Is Starting To Piss Me Off

Google has made changes where changes were not needed. I'm now having trouble signing in to my blog. The sign-in is totally different now. Now I get two options for signing in. One of the ones I clicked on this morning went to a page after doing my password that wanted me to either do a Google+ account or a new blogger profile. Had to shut that shit down because I couldn't get out of it. It didn't do a fucking thing when I clicked on the back arrow. Then tried again and got my blog, but could not find anything for doing a new post even tho it said I was signed in. Clicked on dashboard and got the same bullshit about doing new accounts and/or blogger profile. Had to shut down that tab and try again and finally was able to find the link for a new post so I could do this post to bitch about Google.

Some time back I made the mistake of doing Google+ and wound up with two Google+ sites, one probably linked from my blog and another from my YouTube account (YouTube wouldn't accept my 'nom de intratubes' [Kulkuri] and G-mail wouldn't either so I used a variation). I'd like to get rid of one of the Google+ accounts, but am afraid I'll lose my blogs and everything else if I try to delete one. I also have a G-mail account and yesterday I had a helluva time trying to see if there was anything new in my inbox. I don't use the G-mail account for much other than my K-Mart rewards thingee and when I want to send an e-mail to inquire about something on Craig's list, etc. and I don't want to use my other e-mail accounts.

Part of my problem may lie with my confuser. The Old Lady says she doesn't have any problems with blogger on her confuser.

I also was having trouble with my Yahoo e-mail after they made changes. Took me some time to figure out how to go to the next message without deleting. Instead of up and down arrows above the message they put in arrows on the sides of the message to go to next or previous message. At times had a helluva time trying to delete messages. Sometimes there wasn't anything I could do to delete messages and it would freeze up. I ran a my virus program and a cleaner and now it is working some better, but not sure if it is back to normal, or is this the new normal?? These two things my be related, but Google did make changes to blogger that didn't need to be changed like the sign-in page.

Bottom line is "If it ain't broke, don't fix it"!!!!!! The fucking geeks need to learn that instead of changing shit just because they can and they think it may be better. Sometimes you don't need to improve something that is working as it is!!

Sometimes I've tried to improve something and fucked it up and wasted a lot of time trying to fix it to get it back to where it was when I started.
Posted by Kulkuri at 10:50 AM 5 comments

Heard about this earlier today on the radio and happened upon the video.

Here's a picture of the artwork without the blackout of the finger.
Posted by Kulkuri at 7:31 PM 1 comments

Links to this post
Email ThisBlogThis!Share to TwitterShare to FacebookShare to Pinterest
Labels: Fickle Finger of Fate

Physics And/Or Leverage Will Get You

He managed to lift it, but couldn't move it.
Posted by Kulkuri at 6:19 PM 1 comments

The Old Lady Keeps Buying More Work For Me 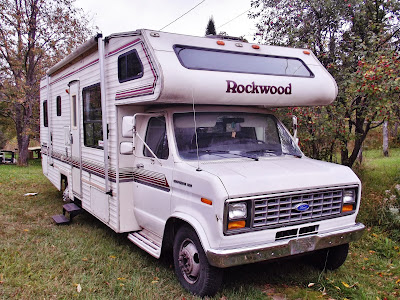 Back in Sept. The Old Lady bought this motorhome. It's a '89 model built on a Ford E-350 chassis. It has a 460 V-8 motor. When we looked at it it had a problem with the brakes. It would shake badly when you applied the brakes. The seller said he got an estimate on what it would cost to replace the rotors to do a brake job and was told $400. (So far I've spent about $200 on the brake job and done the work myself.) So he said he'd knock that much off the asking price. The RV battery was shot so I got him to knock another $100 off. 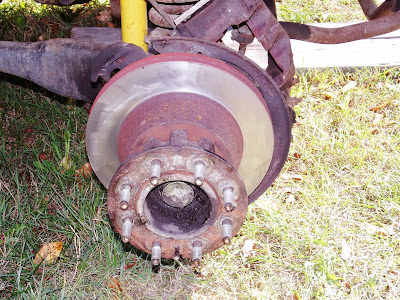 The first thing I did with the brakes was to check how warped the rotors might be and discovered the wheel bearing on the drivers side was way too loose. I could shake the hub in and out when I removed the caliper. The wheel bearings had been replaced about 1000 miles before we bought it. The previous owner thought that might have been the problem with the brakes shaking. A loose wheel bearing will cause it to shake under braking. But after I adjusted the wheel bearing the problem was still there. So I took the rotors off and brought them to a local auto parts store that turns rotors and had them turned to true them up. They were able to true up the rotors and I got new pads and installed them when I put it back together. It didn't shake anymore when I test drove it, but the calipers hung up and were dragging. One of the brakes was smoking when I got back home after only a few miles. Didn't appear to do any damage to the rotors. 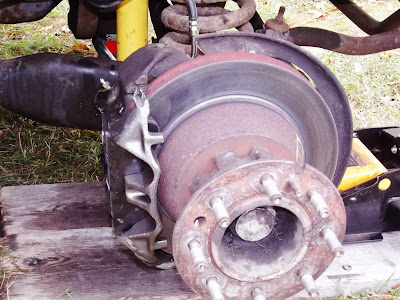 So I got new calipers and flexible hoses. After installing the new parts and test driving it the problem was gone. I still need to check the rear brakes and see what shape the shoes are in. I know they're working, just don't know how well.

Then I changed oil and filter on the engine and lubed the front end and u-joints on the drive shaft. Checked the level in the rear end. Had to add about half a quart of gear lube. Now I have a gas leak coming from somewhere on top of the gas tank. Not sure where the gas is coming from or how much is leaking. Will need to investigate this problem further. 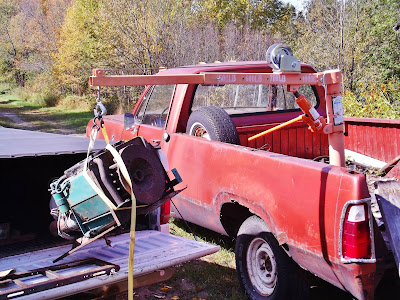 This is the generator for the motorhome. Have no idea what is wrong with it or why it was taken out of the motorhome. This is something I will look at next year. The first thing I'll have to figure out is how to hook up a battery to it to turn the starter. The throttle and choke butterflies were frozen in place, but some penetrating oil sprayed on the shafts freed them up.

I winterized the water system on the motorhome so it shouldn't freeze. Had the propane tank filled and checked out the stove. All the burners and the oven work. Will check out the furnace sometime in the future and also the refrigerator, which is gas and 110 electric. Still need to do some minor stuff inside, like replacing a few cabinet latches. The Old Lady is planning on us heading South in February, so I need to get things done before winter sets in.
Posted by Kulkuri at 8:27 PM 7 comments