Not The Magazine I Remember From My Youth

Recently we bought a copy of National Geographic. Saw in big letters on the cover, "War on Science" and thought it might be an interesting article. (Not Really.) The Old Lady noticed how little written content there was and how short the articles were.  (The Old Lady said that even tho' I don't read as fast as she does, I finished reading the magazine very quickly.) I noticed a lack of what was the main draw of the magazine when I was young. No chocolate tits. There used to be articles on tribes in Africa, or South America, or New Guinea It's been Spring for a week now and there actually were signs of Spring, leaves budding out, some flowers appearing, etc.... Then this: 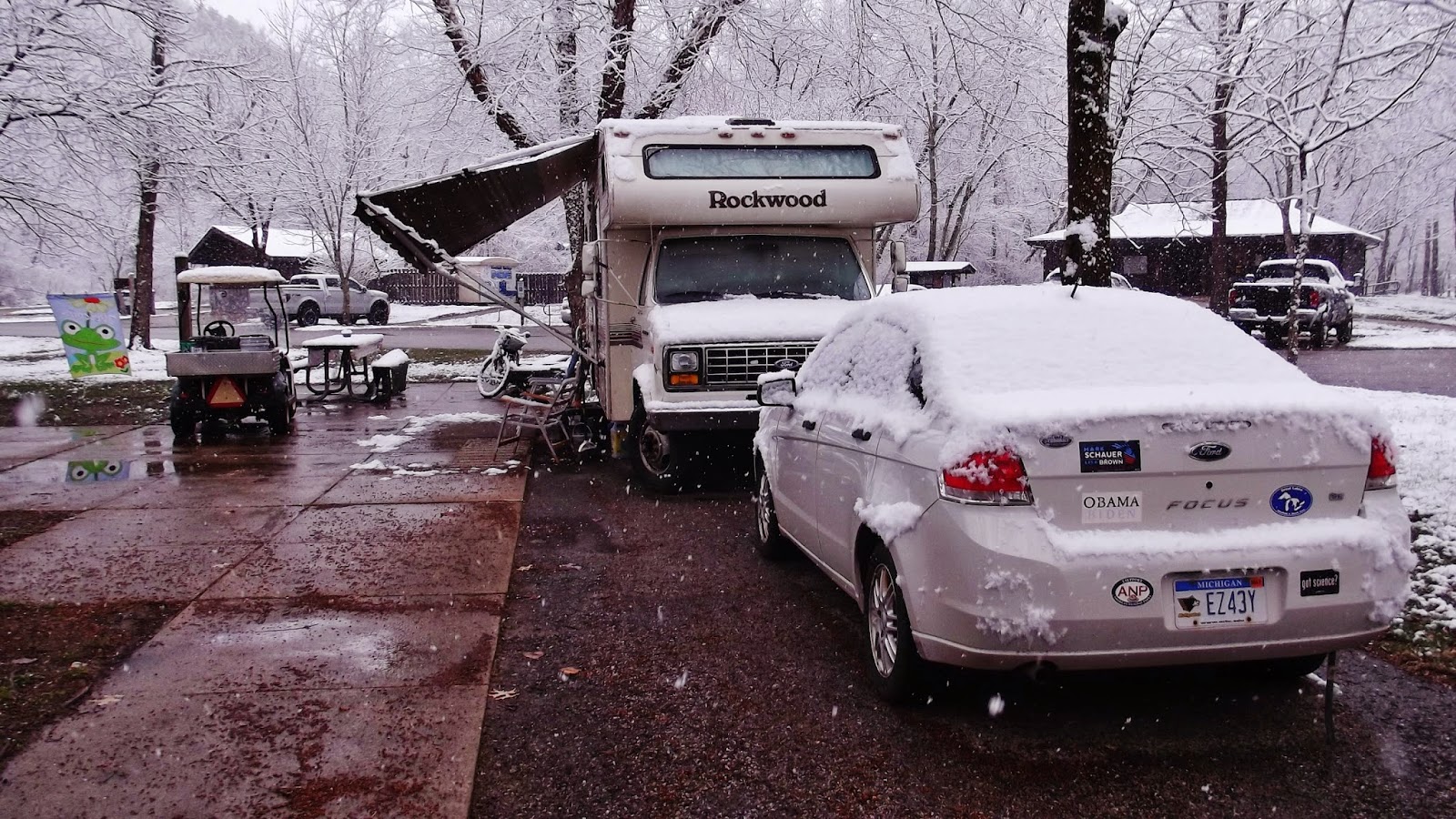 If I wanted to put up with snow during Spring, I'd have stayed home. There was snow when we arrived here and looks like snow will bid us farewell. Tomorrow is supposed to be warmer so this won't stay.
The funny thing is it feels better today than it did the other day when the temp was a little higher. It's around freezing today and the other day it was in the 40s. It felt colder when it was 40 and damp than it does when it's 32 and snowing.

On April Fools Day we will be leaving here and a week or so later we'll head further South in search of Summer. Finding Spring appears to be a bust, so we'll push on looking for nicer weather before heading home.
Posted by Kulkuri at 10:57 AM 3 comments 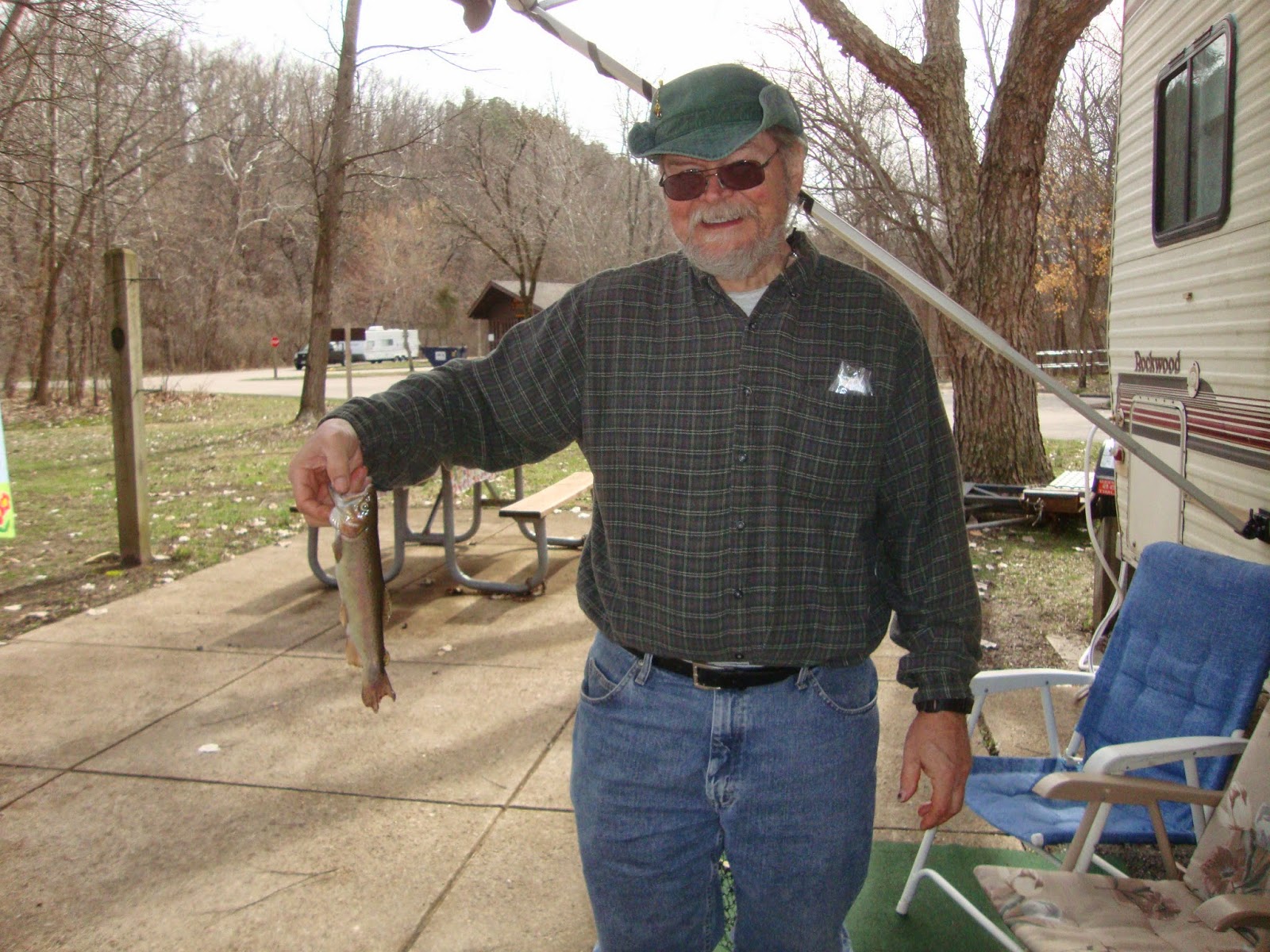 Made some more improvements to The Guppy. I replaced some handles on some drawers and closet doors.

Links to this post
Email ThisBlogThis!Share to TwitterShare to FacebookShare to Pinterest
Labels: Cabinet Handles, The Guppy

Improvements For The Guppy

The Guppy has a radio with speakers in front and back in the bedroom. The only problem is it's a pain in the ass to turn the radio on and off because it is in the dash in the cab of the motorhome. I figured it would make life simpler if there was a radio that was easy to get at.


I had some radios laying around and some speakers from a surround sound system so I brought a couple radios and some speakers with us on our trip. I got power from one of the 12v lights close to where I figured I'd put the radio when the installation was done. When I tried one radio it seemed to stop at stations when I did a scan, but all I got was a loud hum. So I hooked up the other radio and it got some stations and played fairly well. One odd thing was at times there would be a lot of static and discovered that if I turned on a light the static went away. Sometimes there would be some static, but could listen to the radio. That may have been the problem with the first radio I tried.

Yesterday I installed the radio in an overhead cabinet in the kitchen/dining area. The space where I put it is kind of a dead space in the cabinet. There is a metal rack above the radio in the cabinet so about the only space not usable anymore is the area taken up by the radio. Now we no longer have to crawl into the cab of the motorhome to turn the radio on or off.

The radio has a CD player in it. Need to get a CD and see if it works. Forgot to bring any along. Should also run a CD cleaner disc thru it to get rid of the cobwebs, etc.

Originally thought I'd have to mount the antenna on the outside of the motorhome, but when I had it hooked up temporarily I discovered that it worked with the antenna on the inside. (The outside of the walls are fiberglas, which explains why I can get a signal with the antenna inside.) So now it's on the valance for the curtains by the table. If I can find an adapter to go from coax to auto radio I would try hooking the radio up to the TV antenna on top of the motorhome.  I have a hunch I'll have to try make one myself. (That would be the only use for the TV antenna where we are now because we are down in a valley and the only TV reception is via satellite.)
Posted by Kulkuri at 10:05 AM 5 comments