Recently Someone Accused Me of Being Bitter

Am I bitter, HELL NO! I'm FUCKING PISSED! I'm PISSED at the accuser and the 60 million others that voted to put the ORANGE BUFFOON in the White House. From day one he did everything possible to show he was not fit to manage a Blockbuster store let alone be President. I have a hunch that even if he had came right out and said "I'm just shitting you, I don't want the job" the MAGAts would have still voted for the asshole because he represents what they are.

I'm old enough to remember when the Russians were the enemy, not the benefactors of the GOP! Every fucking day there are new revelations about Russian interference in the 2016 election. Every time you turn around there is another Russian in the woodpile! 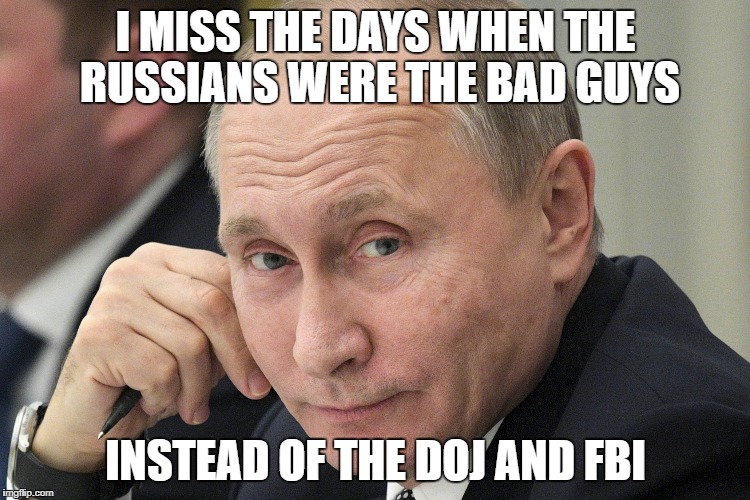 There's the gun nut from Russia who infiltrated the NRA (Now Russian Affiliate) and funneled millions of dollars that the NRA laundered and used for campaign ads. Then there are the Russians that gave money to PACs of various GOP politicians. Like I said there's always another Russian in the woodpile! Where did this lovefest with Russia come from on the Never-Right? #FollowtheRubles

As someone who worked on planes that tracked the Russian bombers to make sure they weren't coming to bomb US, I find the laissez faire attitude of most of the people towards Russia and Putin very disturbing. While I don't think we should go back to the days of Tailgunner Joe finding Commies under every bed, we should be very skeptical of everything that involves Russia.

Just like there is the saying, "Once a Marine, always a Marine", well Putin was KGB and once you are KGB you are always KGB! It may no longer be called KGB, but it is still around and Putin is the MMFWIC (Mean Mother Fucker What's In Charge)!