I Think We Need A New Awning 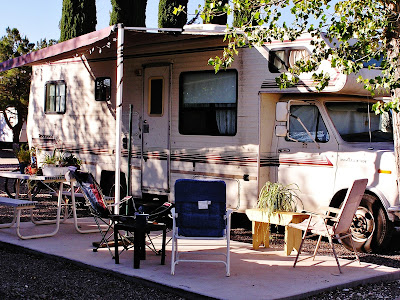 This is the way we had the awning set up. I put a board down under the upright in front and screwed the upright to it. That way it wasn't in the way like it would be when it is attached to the side of the motorhome. It made it easier to walk around but it also made it more hassle to close up. 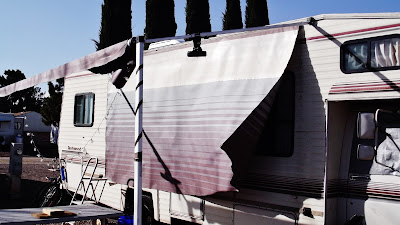 A few nights ago it was windy. The awning was out and flapping pretty good. About 5 o'clock in the morning the Old Lady said she was worried about the awning because it was making so much noise. We were out trying to get the awning closed when it ripped. When we bought The Guppy the awning had already been ripped by high winds on the end that attaches to the motorhome. The previous owner had used a couple of furring strips and screws to attach the awning to the side of the motorhome. We figured we would have to replace it at some time, just have been wondering what design on the awning to get. The Old Lady would like one with the logo of her alma mater. Question is which one, Michigan Tech or Virginia Tech?? The school colors for Virginia Tech would sorta match the accent strips on The Guppy. Anywho, we had sorta figured on replacing it sometime this winter and now we really need to do it if we want shade. 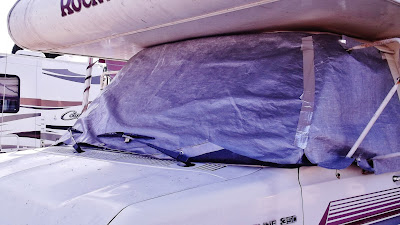 I'm making a cover for the windshield and doors. I had an old tarp with a couple of rips in it so it wasn't much use for covering stuff. I was able to cut pieces out of it to cover the windshield and the windows in the doors. I have it taped together temporarily but will need to sew the pieces together as the tape isn't holding very well. I used aluminum tape as I thought it would hold better than duct tape. Well it doesn't seem to stick to the tarp very well. I bought some strip magnets to hold it in place and is laying smoother than in this picture. The strip magnet came in a roll, so I laid it out for a day or so to straighten out, but it still wants to curl. I laid the magnets out on the trunk of the car during the afternoon and  overnight. But when I cut pieces from it, they at times still want to curl. 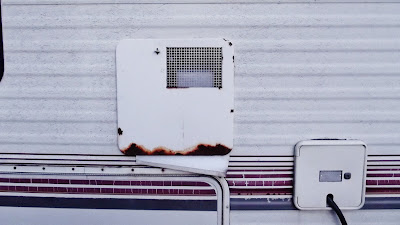 Another thing I've done is put a piece of sheetmetal under the door for the water heater to direct the water away from the compartment under it. The relief valve on the water heater weeps after the water gets hot in the water heater. I replaced the relief valve and it still weeps some water. I thought maybe the city water pressure at campgrounds was too high, so I got a pressure regulator that is supposed to keep the pressure at 40-50 psi. It still weeps. There is no way to adjust the temperature on the water heater, which if I could lower the temp (which gets real hot) that might stop the problem. In any case, I thought this would at least stop the water from running down the door for the storage compartment below the water heater. Yesterday I saw some guys working on the skirting for a trailer here in the RV park and I asked if they had any scrap pieces of sheetmetal that I could have. The guy cut off a piece and gave it to me. I then cut it to size with my utility knife and installed it. I took the screws out across the bottom of the water heater and slipped the sheetmetal up under it and replaced the screws to hold the sheetmetal in place. The piece was bent at one edge and it makes a trough for the water to run off to the side and away from the compartment door.
Posted by Kulkuri at 1:40 PM 3 comments

A Week in Paradise

We flew back from Hawaii a week ago. We had fun while we were there even tho it rained a lot. One of the things that was new to us was the rental car. It didn't have a key. All we got was a fob. It would lock and unlock the doors, do the panic thing (blow the horn) and it also had to be in or around the car in order to start the car and to open the tailgate, liftgate, whatever. I think if you were to buy that model it would come with a key as there was a slot on the handle for the driver's door for a key, but it had a piece of scotch tape over it.

At first I would put the fob in the cupholder in the console, but then I thought what if I locked the doors and couldn't open them. After that revelation I would keep it in my pocket and only take it out to unlock and lock the doors.


One of the things that I didn't like was there wasn't an owner's manual in the car. When we first got it the dash was saying the percentage of the oil change that had been used. One day I played with it and didn't figure out how to change it. When I tried again a day or so later I was able to figure out how to navigate the menu and put it on fuel range. That way I had some idea on how far I could go before it ran out of gas. We had paid for filling the tank at the time of the rental and the guy said as long as we brought back with less than  a 1/4 tank it would be a good deal. We managed to run it down to about 60 miles left and because it was over 25 miles back to the airport and we weren't done running around I put $5 worth in it, which was a littl over a gallon and a half at $2.929 a gallon.

One of the places we went was Waimea Canyon. It was interesting and at the observation places the wind was such you almost had to lean into it to get close to the railing at the edge.

Here's a link to more pictures and info on Waimea Canyon, the Grand Canyon of the Pacific.

We managed to see most of the island, Kauai isn't a very big island. There is still some stuff we didn't see, but we only had a week and like I said it rained a lot. It would rain and some times it was a downpour, but later it would stop and the sun would come out. Some days it would be off and on rain, we would wait until the rain stopped and then go out and play tourist. Almost everywhere people will say, "If you don't like the weather, wait a while and it'll change!" Well, it certainly was true while we were on Kauai. I don't remember it raining so much when I was on Oahu almost 30 years ago, but I was there in April that time.
Posted by Kulkuri at 3:51 PM 4 comments