If They Find It, They Will Play With It

Maiden Voyage of the Guppy


There's a leak in the propane system, so we weren't able to use the stove for cooking. We brought along a microwave (it got pitched because some things on the touchpad didn't want to work, it was only a little over 20 years old so don't know why it didn't want to work properly now), a hotplate, and an electric kettle for heating water. It worked out pretty well altho we figured out it would be good to have a power strip to plug all the electrical appliances into. It was a pain in the ass to have to unplug something in order to plug in another thing that you want to use. 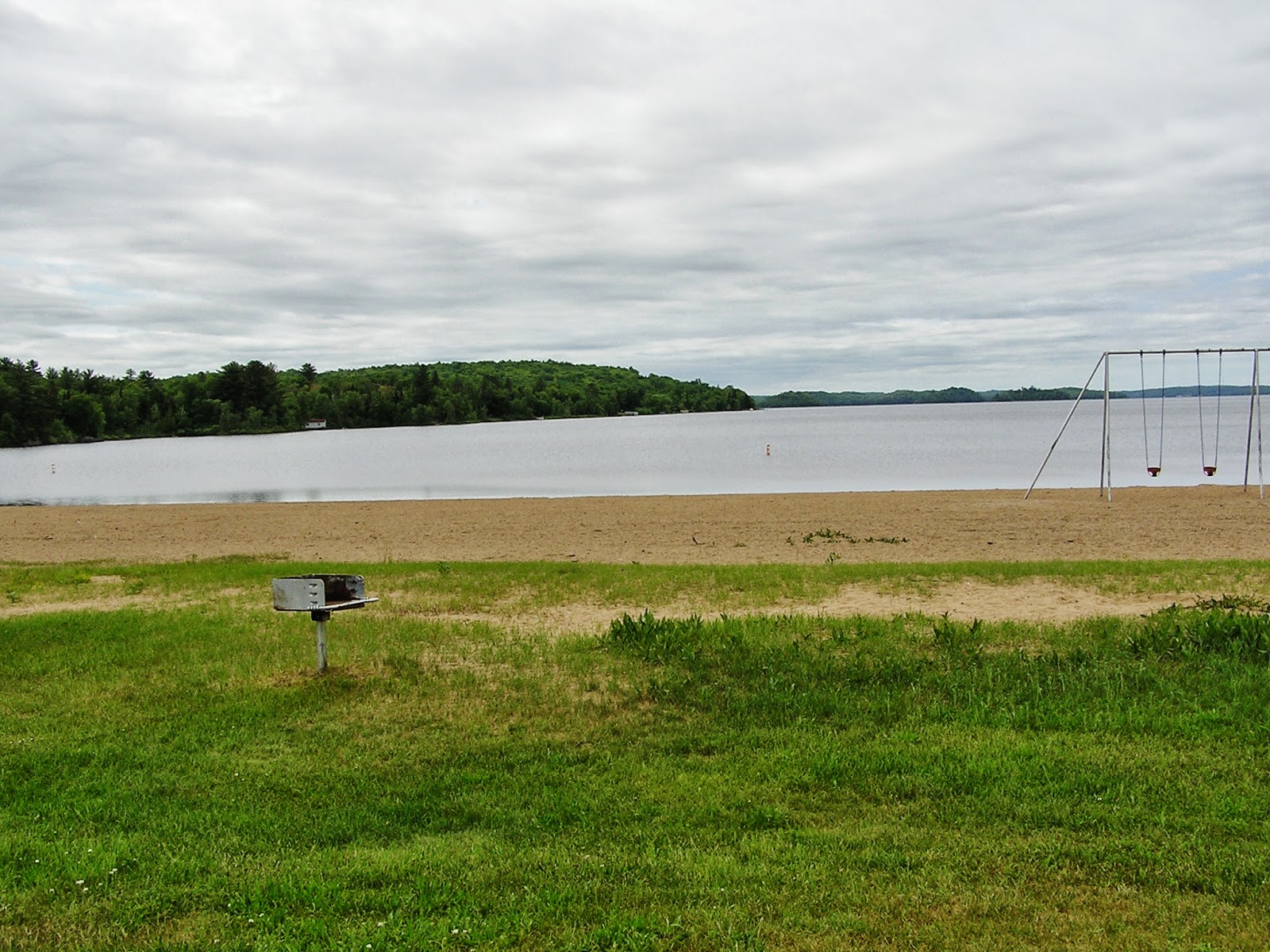 .
The part of the park that is most used is beyond the main entrance by the beach at the lake’s east end and the two campgrounds . The park was named after Dr. Paul Van Riper, who was known as Champion’s frontier doctor. The Van Riper State Park beach was known as a favored swimming spot for many Champion residents. Dr. Van Riper had helped the town to acquire the beach through his position in politics as the town commissioner. Local legend has it that Dr. Van Riper did so after local kids observed him in the act of changing into his swimsuit and made up chant about it that was not very flattering. His first order of business was to make sure that the new park got areas for people to change in immediately.
This is the beach in the park at the lake. It was a summer day the last week of June and nobody was there. Don't know what the water temp was, but the air temp was in the sixties, maybe seventy 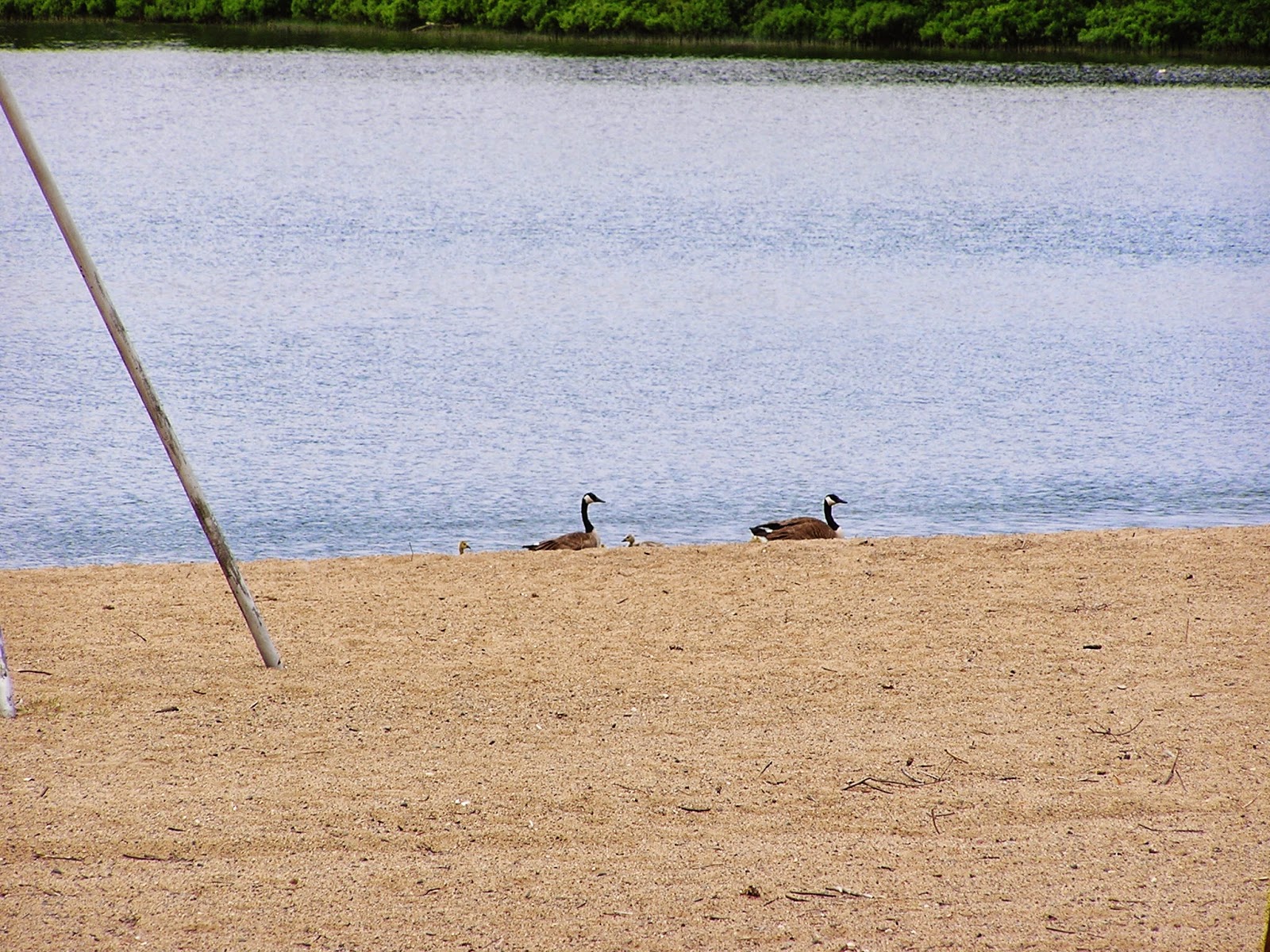 I guess the geese didn't read the sign that said, "No animals or glass containers beyond this point"!!

We bought a new 19 inch TV for the motorhome, it works on AC/DC and has a built-in DVD player. We were hoping to get a couple of channels, but were only able to get one with three sub-channels. Will have to look into getting a new digital antenna for the RV. Also figured out I need to come up with some way to hang the TV where we can see it better. Had it on the bunk over the cab, but the picture didn't look right when we were looking up at it. It has a good picture when you are looking straight at it, when it is on the same level as your line of sight. I have an idea on how to hang it, but I need to figure out what type of screws I need for the mounting holes on the back, are they metric or SAE??

We went to a RV sales place and bought a few things for our RV. Man, the stuff there is expensive!!  Bought a new latch for the screen door because the one on it was broken. It cost $30!! They say a boat is a hole in the water that you throw money into, wonder what the equivalent is for RVs??????

The campground had electrical hookups for 20-30 amp and 20-30-50 amp. Figured out we only need the 20-30 amp as 30 amp is the type of plug on the motorhome. There was a dump station so I was able to empty the holding tanks on my way out. The gray water tank I can empty at home by just letting the water run out on the ground, but the tank for the toilet is another matter!!

About the title of the post. My oldest brother had a class A motorhome and The Old Lady called it a Leviathan, ours is a class C and smaller so she calls it "The Guppy".
Posted by Kulkuri at 10:25 AM 6 comments

Links to this post
Email ThisBlogThis!Share to TwitterShare to FacebookShare to Pinterest
Labels: Camping, RVs, The Guppy

Squatlo says pussy makes you stupid, but who knew it could also trap you?? 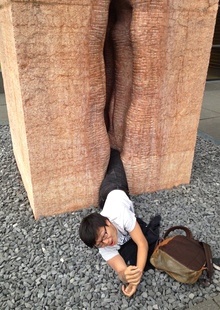 An American student in Germany got trapped in this vagina sculpture. It took 22 firefighters over half an hour to deliver him.

Police confirmed that the firefighters turned midwives delivered the student "by hand and without the application of tools".

TheChacán-Pi (Making Love) artwork by the Peruvian artist Fernando de la Jara has been outside Tübingen University's institute for microbiology and virology since 2001 and had previously mainly attracted juvenile sniggers rather than adventurous explorers. From .theguardian.com, 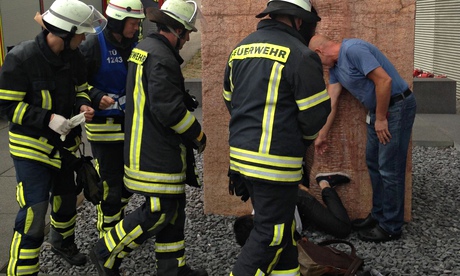 It also appears Squatlo beat me to doing a post on this and probably did a better job of it, but I figured I'd give it a shot anywho.
Posted by Kulkuri at 9:57 AM 1 comments

This week in Washington, DC, the Freedom and Faith Coalition is holding their Road to Majority conference. 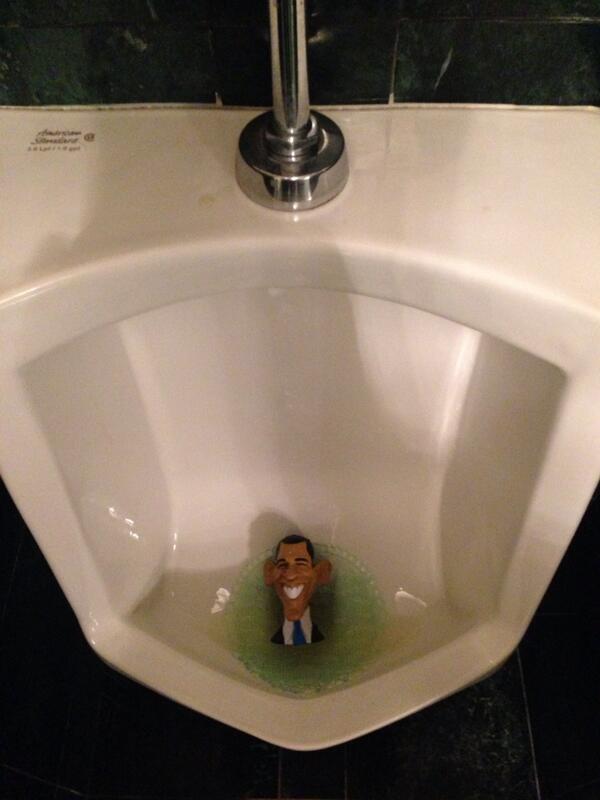 Another Fix On The Motorhome

Last fall I put some gas with Sta-Bil in it into the motorhome and ran it for awhile as part of the winterization process. After shutting it down I noticed there was gas on the bottom of the gas tank. Didn't get around to working on the problem then. During the winter I started it up and moved it. I noticed that it looked like someone had pissed under the motorhome. There was a yellow stain in the snow where it had sat with the engine running. After the snow was gone I crawled under and figured out the leak was on top of the tank. Finally figured out the leak was in the return line as it only leaked when the engine was running.

I thought I'd have to drop the tank to get at the problem, but while working on removing the tank I saw there was enough room between the frame and the floor of the motorhome for me to reach the line. I took the rear wheels off and was able to gain access.

Just added a new blog to my blogroll. I came across Stonekettle Station sometime last year and have occasionally looked at it and read some of his posts. Today I found a link to one of his blogposts on facebook. See previous post. Anywho, I read a few more of his posts and really liked the ones he did on veterans, one on the VA and another on Thanks for your service.

By putting the blog on my blogroll I will see when there is a new post and will check it out instead of going months between looking at the blog.
Posted by Kulkuri at 10:19 AM 0 comments

Saw something on facebook and when I clicked on the link, I found a very delicious rant. This guy expressed my feelings about the media circus about Bergdahl's release from being a POW better than I could. Here's a link to the blog post. Then he did a followup post on his blog Stonekettle Station.

Like I said this guy has done a couple of very reasoned posts about the Bergdahl situation. The thing that sums up the fury in the media that I think says it best is this:

These people are so eaten up with hatred, their souls are so corrupted by their poisonous worldview, that instead of satisfaction at the return of their fellow countryman they feel only loathing – because they simply cannot stand to see Obama with a joyous Jani and Bob Bergdahl, announcing the safe repatriation of their son.

Both of these posts are fairly lengthy but well worth the read.
Posted by Kulkuri at 9:55 AM 1 comments

Things That Make You Go HMMMMM!!

Yesterday I bought some Neapolitan ice cream. This morning I was wondering why vanilla, chocolate and strawberry ice cream together in one container would be called Neapolitan?? Is that the only flavors available in Naples?????
Posted by Kulkuri at 10:27 AM 6 comments