When I first saw this commercial I didn't know if it was a parody, satire or real. I guess it is real. Still it strikes me as really weird!!

Links to this post
Email ThisBlogThis!Share to TwitterShare to FacebookShare to Pinterest
Labels: Devil's Donuts, Punish the Porcelain

The Guppy Was A Real Adventure This Time

We left for AZ on the 27th. About 75 miles into the trip I noticed a vibration on taking off from a 4-way stop. After I got up to speed it seemed to go away. At first I thought maybe I had a tire out of balance or something. By the time we got to Iowa it was worse. We stopped for the second night at a campground in Missouri. In the morning I slid under and looked at the u-joints on the driveshaft. It has a three piece driveshaft with two carrier bearings and I couldn't find anything wrong. Decided to continue on and hope it would get us to AZ.

We got as far as around KC and we decided to stop for lunch. As I went to pull out on to the street to head for where the restaurants were the driveshaft fell out. I coasted to a stop on the shoulder. Because the driveshaft fell out we had to put something under the wheel to keep it from rolling. The Old Lady called AAA as we have the RV+ plan. First she had trouble explaining what kind of motorhome we have (Class C), but finally got told a wrecker would be sent. AAA recommended a repair shop, but when talking to them they said it was too tall to fit in their shop. They gave us a number for another shop and we got the same story. They recommended the local Ford/RV dealer.

The Ford/RV dealer said they were going close at 3 pm as it was a Saturday. And if we had it towed there it might be 2 weeks before they could get to it. Thought about having it towed to the Walmart parking lot that we could see from where we broke down. The Old Lady called The Kid to let her know we broke down and asker her to use her smart phone to check if we could park at Walmart. The Kid even called and was told a local ordinance banned overnight RV parking there. There was also a Super 8 motel in sight. I took the car off the tow dolly and The Old Lady went over and asked about parking The Guppy there and got us a room. After waiting all afternoon the tow truck finally arrived after several calls from AAA to see if it had come. The tow truck was one that they use for semis. (A bit of overkill).


Lunch turned out to be supper as it around 5 pm by the time the tow truck hauled The Guppy to over by the motel. After we ate we went looking for parts. At Autozone I got the u-joints and the u-bolts that hold the joint to the rearend. But they didn't even have a listing for the yoke. Went to O'Reillys down the street and they didn't have a listing either. Figured we'd have to wait until Monday and try the Ford/RV dealer.

Monday morning while at breakfast at the motel got to talking to another guest. Turned out she was originally from the area and she knew a shop that worked on her horse trailer. She called and passed the phone to me to talk to the guy. He gave me the name and directions for a place that did truck parts and service. I drove there (two exits back on the Interstate) and they didn't have the part in stock, but they ordered it and had it FedExed overnight. The next day I got a new yoke and that afternoon I put the driveshaft together and back in The Guppy.

The next morning we hit the road again. A couple hundred miles down the road I felt a shudder, but thought maybe it was just a bad spot in the road. A couple miles down the road we had to stop for construction and a guy pulled up alongside on the shoulder and told us we had lost a wheel on the tow dolly. I pulled over on to the shoulder and when I looked the tow dolly was not only missing a wheel, it was also missing the hub for the wheel. (The Guppy has a lot of power, I hardly noticed the extra drag from the missing wheel.) I pulled the car off and dragged the tow dolly around into the ditch as much as possible, basically pivoting on the side with the missing wheel. We only paid $400 for it a couple years ago and couldn't figure out how I could get it fixed there in the middle of Kansas. (I think I'll avoid Kansas in the future).

From there on we convoyed. The Old Lady drove the car and I drove The Guppy. After we lost the anchor (tow dolly) the gas mileage improved on The Guppy. I haven't run the figures yet, but just doing it in my head it seems to have gone from less than 6 mpg to 8 mpg or better. That more than makes up for the gas used to run the car. The only problem was the car needs a brake job, but that was only a problem when stopping. It makes a horrible grinding noise when braking and when first starting to move. Am in the process of buying the parts I need to do the brake job.

We finally got here over a week after we left home and are getting settled in the RV park. We were shooting for getting here on the first and got here on the fourth. We spent four nights in the motel, so if we hadn't broke down we would have got here as planned. 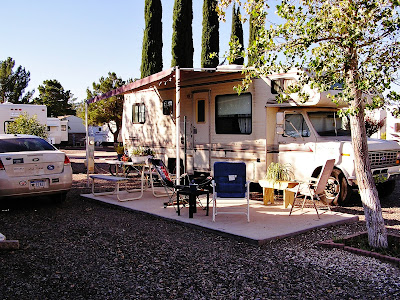