Further Adventures With The Guppy

One of the improvements I made before hitting the road was I replaced the charger for the RV battery and to run the 12v stuff when plugged into 110. The old one was putting out too many volts. It was putting out about 17v at all times. It was burning up the lights and killed a radio/CD player I had put into one of the cabinets to make it easier to turn on the tunes. The old radio would only work if there were several lights on or something that drew a lot of 12v power. Then it wouldn't work at all. 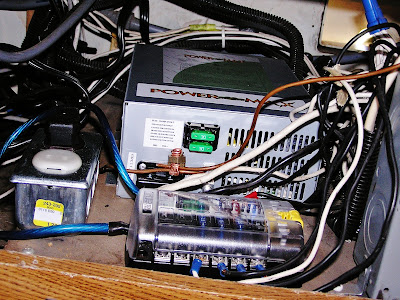 This is the new charger. It works as advertised; when the battery is down, it puts out 14.6v, then drops to 13.6v, and finally is at 13.2v to maintain the battery. I had to install an outlet because the new charger came with a cord with a plug on the end and no way to get into the box to wire up the 110. Also had to put in a fuse block because the old charger had a built-in fuse block. One of the wires to the fuses was white and at first I couldn't figure out what a white wire was doing mixed in with the black ones. After hooking up all the wires except the white one and trying various things to make sure everything worked, the water heater didn't work. When I traced the white wire to where it went, I found out it went to the switch for the water heater. As you can see the white wire is hooked up. 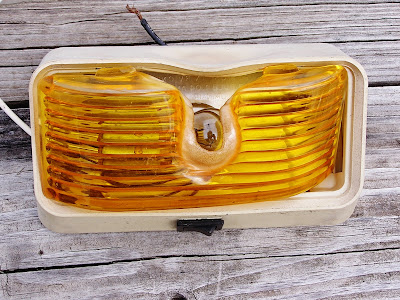 This is one of the reasons I changed the charger. Other bulbs were burning out, but this was the worst one. It got to the point where the lens wouldn't stay on the light. A couple other lights got hot enough to melt things, but instead of melting the lens the base of the light was melting. 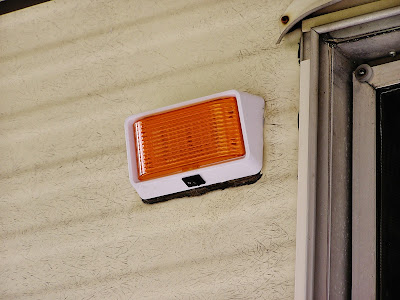 This is the new outside light. It has a bunch of LEDs in it so it should last longer than I will be using The Guppy, and even if the charger starts putting out more voltage, it will handle up to 18v. I also ordered some LED bulbs to replace bulbs in some of the lights that we use the most. The LED bulbs were in two different orders and they are different colors or temperatures. One is a whiter light than the other one. The LED bulbs should help conserve the battery when we are boondocking.

After I replaced the charger I bought a new radio/CD player and installed it in the hole where the radio that died was in the cabinet. Now all we need is to find some decent radio stations!!

The next thing I need to do is replace the water pump. It will pump water from the holding tank, but after it shuts off there is a burst of good pressure and then the pressure drops off quite a bit. If it is original to The Guppy, it is over 25 years old and could just be worn out. I had drained the water heater before we left and when I was getting all the RV anti-freeze out of the plumbing, it took a long time to fill the water heater and get water to the hot water faucet.

I really can't complain too much. The Guppy didn't cost an arm and a leg to buy because it was 25 years old when we bought it. With something that old it's a wonder we haven't had to fix something major. Now I just fucking jinxed myself!!
Posted by Kulkuri at 7:59 PM 3 comments

Links to this post
Email ThisBlogThis!Share to TwitterShare to FacebookShare to Pinterest
Labels: LED Bulb, Lightbulbs, Radio/CD player, The Guppy

That campground we are at is such a "dead zone" that there is only a few radio stations that come in. Most are bible-banger ones, but there is one country station that is local and pays a variety of songs new and old. This one is one that I thought had a catchy line in it.