Driving In Missouri Is Interesting

Driving in the Ozarks is interesting, most of the roads other than the federal ones (interstate and US highways) are what I think of as NOE (Nap Of the Earth). The state and county roads follow the terrain, some follow ridges and have a lot of curves. Sometimes the curve goes on for so long that you think you are going to meet yourself when you get around the curve. Following the ridges made sense when they were first footpaths as you would want to stick to high ground in order to not be ambushed (then again, they way some people in this country are lately, avoiding an ambush is still a good idea!!) Even when the road goes straight it still has a lot of curves, only up and down instead of side to side. If there is a little dip in the ground the road follows it, they haven't filled in the dips or cut down the hills. Some roads are enough to make people carsick, even if they aren't usually likely to get carsick. Kinda like an "E" ticket ride at Disneyland!!

Then there is this: 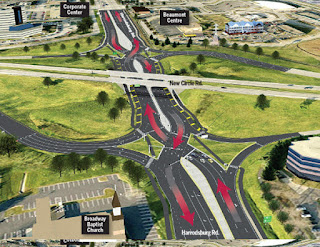 The first time I saw this I thought it was an anomaly, when I saw the second one, I knew it wasn't. These are where a road crosses over or under a divided highway. You have to switch sides and go on the left and when on the other side of the divided highway switch back again to the right side of the road. When I first saw this, I thought "What The Fuck??" The reason for switching sides is so you can make a left turn onto the onramp without crossing in front of oncoming traffic. A fucking left turn arrow on the traffic light would do the job a lot simpler!! There are the same number of traffic lights because there are lights at the Xs on either side. It must be common enough that I was able to find this picture of it.

Anywho, now we're back home and waiting for the snow to start any moment now!!