Hopefully the Mileage Will Improve

Last year when we came back from campground hosting at Pictured Rocks National Lakeshore The Guppy started running rough. Thought it was the O2 sensor and ordered a new one. Spent what good weather there was trying to remove the old one. Then in the Spring when I was waiting for the snow to melt, The Old Lady's niece and her family came to stay with us. They were living in The Guppy so I couldn't work on it. When they found a place of their own I started trying to remove the O2 sensor again. Finally I gave up and decided to get a nut that would fit the O2 sensor, drill a hole in the exhaust pipe and weld the nut on. That worked and I was finally able to install the new sensor.

It still wasn't running right, so I thought I need to replace the EGR valve. By then we were campground hosts again at Pictured Rocks and living in a tent. On my way to Pictured Rocks I stopped at a parts store and ordered the EGR valve. When it came in I picked it up and went home. I replaced the EGR valve, but while I was doing that I noticed a elbow on a vacuum line that had a hole worn in it. Didn't have time to fix because I needed to bring The Guppy to the campground because living in a tent was getting old.

After things cleared out and the black smoke lessened to the point where I could hardly notice, it cruised right along. The Guppy ran decent there and back. I think it got about the same mileage as before I did the work, maybe even a slight improvement.

After I got The Guppy home again I asked my neighbor who is a mechanic to look at the part and tell me what it was. He looked at the part on the top of the engine after I had removed the air cleaner and ducting so could see the problem part. He didn't know (he's not a Ford man, prefers Chevys), so I did a lot of googling of things like vacuum schematics for '89 E-350. Found what I thought might be it, but it was listed as "FPR". What the fuck is FPR? Finally found out it was Fuel Pressure Regulator. It allows excess gas from the fuel rail to go back the gas tank. Bought one, then came the fun of removing the old one.

There are 3 screws that hold the part on. They are allen head 4mm or 5/32. I had a set with a 5/32 allen wrench. In order to get at the screws I had to reach under the part and one of them I had to reach under fuel lines. I lost the wrench a couple times and found it again. Then I lost it and could not find it. I have lots of allen wrenches, but none the right size and shape. It needed to be a small L-shaped one. So I bought another set.

The Old Lady said why don't you put a leash on the wrench so you won't lost this one? I have some waxed lace that is used to tie wire bundles together on aircraft and thought that would be perfect for making a leash for the wrench. 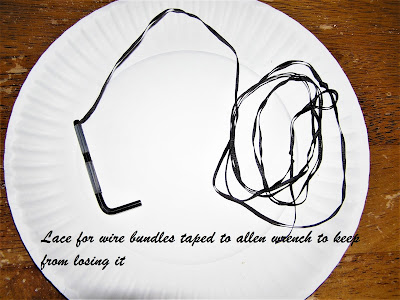 With the new wrench I was able to remove the old part and install the new one. One of the screws was very hard to get at because I had to reach under the fuel lines and feel around until I get the wrench in the screw. Getting it out was easy compared to putting the screw back in. Two of the screws I could reach and start with my fingers fairly easily. The third one not so easy. I thought maybe a longer screw would be easier to install, found the right size metric screw and got it started. After tightening it about half way I realized it was too long, so I had to take it out and put the original screw in. I did manage to get it in and all the screws tight, put all the parts I removed for access back in place and got it running again. Hopefully the mileage will improve, but won't know until after we hit the road again some time next month.
Posted by Kulkuri at 11:49 AM