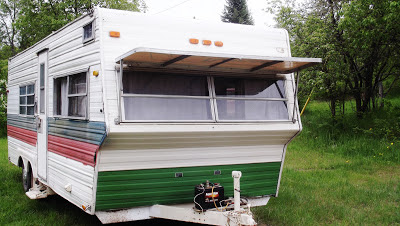 The Old Lady bought this trailer last week and it looks like I got my work cut out for me. Three of the four corners need work. The fridge doesn't work and the plumbing is shot. Looks like it froze and a previous owner did a new hookup for cold water. The good news? None of the windows are broken. 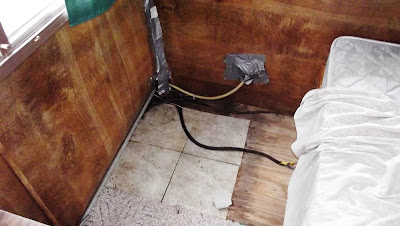 This is part of the old plumbing, thought the hose going into the wall was from a water tank, but no, it just went into the wall and over to the outside water fill opening. The wires on the floor were probably to the water tank and water pump which have been removed some time ago. 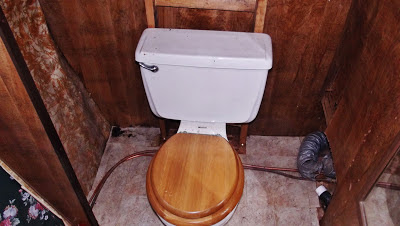 Also it appears a previous owner was a member of an ultra-Reich Wing group. The Birch John Society!! Someone replaced the old travel trailer toilet with a regular toilet and put it in where the shower used to be. It is set up like the toilets on trains used to be way back when. There's no holding tank for it and unless I hook up some drain pipe it'll dump right out on the ground. I plan to tie it in to the septic system where we used to have a mobile home. We're not going to use the trailer for travel, just want to have a "guest cabin" when the kids come to visit. 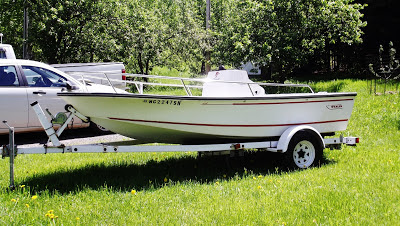 And this is my project. A 14ft Boston Whaler that I bought last Friday. All the guy I bought it from could guarantee was that it was water tight and floats. Shit, a Boston Whaler will float if cut in half or thirds. 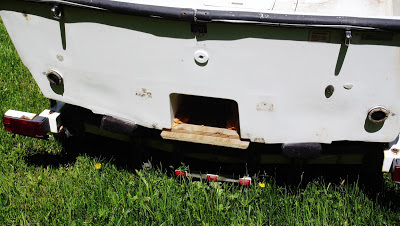 This is where the jet drive used to come out. Need to reinforce the transom so I can hang an outboard on it. It came with a 40hp motor. Should move pretty good once I get it fixed up. 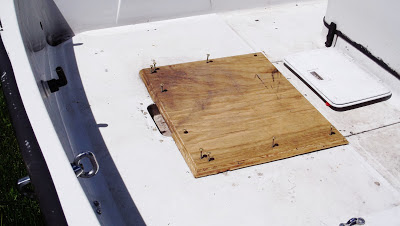 This is where the motor and jet drive were inside the boat. There's a tunnel that comes from the center console and ends just after the piece of plywood. Looks like the guy figured on running the control cables thru there to the motor. Which is what I plan on doing, unless as I work on it it doesn't work out. 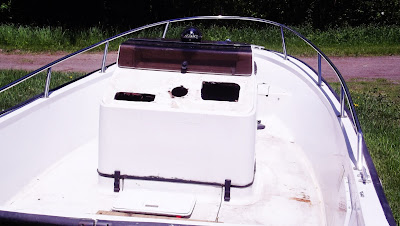 This it the center console where I'll mount the controls. Also need to put in some seats. That's why I was goggling diagrams for the wood reinforcements on Boston Whalers (my post last Tuesday).

The pieces parts are worth more than I paid for everything, boat, trailer, and motor. Got it all for $450, so don't think I went wrong in buying it. Once it is made seaworthy it should be worth several times what I paid.
Posted by Kulkuri at 11:33 AM