Telephone Surveillance, Tell Me About It 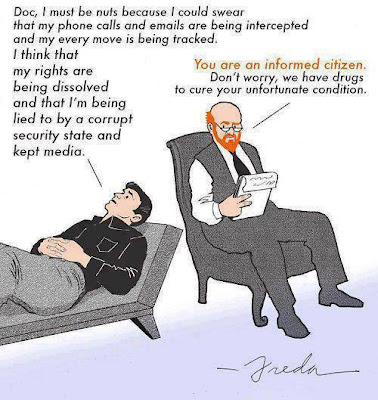 All this talk about the NSA snooping into phone records and e-mails kinda has me chuckling. It's not like they are listening to our phone calls or reading our e-mails, they are just seeing who is contacting who, which are all in the business records of the phone companies and IPOs. And supposedly that is only on foreign calls and e-mails.

30+ years ago when I worked in Lockheed's Skunk Works in "Beautiful Downtown Burbank", my phone was tapped. It took longer than usual for me to get phone service when I rented an apartment in the Valley. Then one day I saw a guy up on the pole in the alley behind the apartment and after that the phone worked. I didn't use the phone much, still don't, but The Old Lady noticed funny things about the phone service. At times when talking to a friend, the friend would comment on how the phone sounded funny. The Old Lady would say, "Lockheed's got a tap on the phone, so we can't talk about national secrets, but we can talk about that drug deal we got going down!!" She said there would be a click and the phone would clear up. No more static or funny noises!!

Talking with co-workers I heard about how some were followed when they were off the job. One guy said he noticed someone around just about everywhere he went. One day he went into a store and then out again quickly and around the corner. When the guy came around the corner, he threw him against the wall and asked him what the fuck he was doing following him. The next day he got called into an office and chewed out. The guy following him was there too, and he said basically what shit job the guy following him was doing because he figured it out. I never noticed whether or not I was followed, but I led a pretty boring life so I hope they had fun if someone was following me!!