If It Ain't One Thing, It's Several

Got our water situation fixed with a new well, but that wasn't the end of our problems. Discovered The Old Lady's car needs a brake job. It's only got almost 82k miles, why would it need new brake pads and rotors?? I'll deal with that next week.

Recently we had a short power outage. The power was only off for a short period of time. By the time I called friend on the cellphone and found out he didn't have power either, the power came back on a few minutes later. Later that evening I decided we would have some ice cream on some pie for desert (or evening snack) and discovered the ice cream was very soft. I put the ice cream in the big freezer and started checking the temp in the refrigerator. The temp in the refrigerator was pushing 50° and in the freezer it was 15°. If the freezer isn't down close to zero, ice cream will get soft. Thought at first the refrigerator needed to be reset because sometimes after a power failure the compressor won't start again until it is reset. The way to reset this one is to turn off the power and turn the power back on. (Learned that a couple years ago when we returned home from spending some time visiting The Kid and the refrigerator wasn't working. We bought a new one and later when I went to figure out why it died, it worked when I plugged it in.) The Old Lady put stuff like milk in a cooler with some ice.

The next day it was not keeping the temp cold enough in either the freezer part or the refrigerator. It was cycling between 20° and 40° in the freezer. I pulled it out and started looking at it to determine why it wasn't working right. The compressor and some lines were warm and some lines were cold. I decided to look in the back of the freezer compartment. Had a hunch the fan wasn't working. Pulled the back of the freezer compartment off and the coils had frost on them. The fan wasn't running and after I pulled the fan out I discovered why. 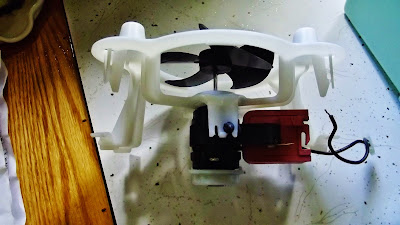 The power surge must have fried the solder joint of the wire and it came loose. When I pulled the fan the wire wasn't out like in the picture, it just didn't look quite right.
I swapped refrigerators, put the old one back, the one I thought had died a couple years back. One of these days I'll see about fixing the fan. First I'll see if I can solder the wire back on, but I'll need to cut away some of the housing to find where connection is for the wire. It was all sealed up. If that don't work I can always order a new one.
Posted by Kulkuri at 12:40 PM

Email ThisBlogThis!Share to TwitterShare to FacebookShare to Pinterest
Labels: Refrigerator