I have been wondering about this for the last decade or two. Sometimes they act like Junior High kids and at other times much younger. Some of their bullshit is so ridiculous as to be positively infantile!! Case in point is an e-mail I received recently from a Tea-Bagger relative. (I had blocked his e-mails for a couple years and then figured I'd unblock him just to see what laughable bullshit was going around in his "government-hating circle-jerk echo chamber".  I should copyright that phrase or something)

Recently I got an e-mail titled "HISTORY LESSON" that had been forwarded so many times and had so many < with blank lines it took a long time to scroll down to the end of the message.

It started off saying humans began as hunter-gathers and then with something that looked amusing enough at first glance.
The two most important events in all of history were the
invention of beer and the invention of the wheel. The wheel
was invented to get man to the beer. These were the
foundation of modern civilization and together were the
catalyst for the splitting of humanity
into two distinct subgroups:
1 . Liberals, and
2. Conservatives.

Until it got to the part about the subgroups.

Then it said because of beer and no bottles or cans people had to stay close to the brewery and villages were formed and agriculture developed because grain was needed to brew beer.

Then this;  Some men spent their days tracking and killing animals to
BBQ at night while they were drinking beer. This was the
beginning of what is known as the Conservative
movement..

Other men who were weaker and less skilled at hunting
learned to live off the conservatives by showing up for the
nightly BBQ's and doing the sewing, fetching, and hair
dressing. This was the beginning of the Liberal
movement.

Some of these liberal men eventually evolved into women. (Does this mean conservatives are really closeted gays??)
Those became known as girlie-men. Some noteworthy liberal
achievements include the domestication of cats, the
invention of group therapy, group hugs, and the concept of
Democratic voting (this proves conservatives can't stand democracy) to decide how
to divide the meat and beer that conservatives
provided.

Then it went on to say Liberals were Social Workers, Personal Injury Lawyers, Journalists, etc..
And Conservatives had all these rough, tough jobs like cowboys, lumberjacks, construction workers, firemen, etc...

Liberals produce little or nothing. They like to govern the
producers and decide what to do with the production.

I think you have to be forward thinking (liberal) to start a business or expand. Conservatives are afraid of the future and always looking backward. (They really did like those 50s sit-coms like "Leave it to Beaver" and "Father know best"!!)

I did a couple google searches to find an appropriate illustration to finish off this post. This was the best I could find. 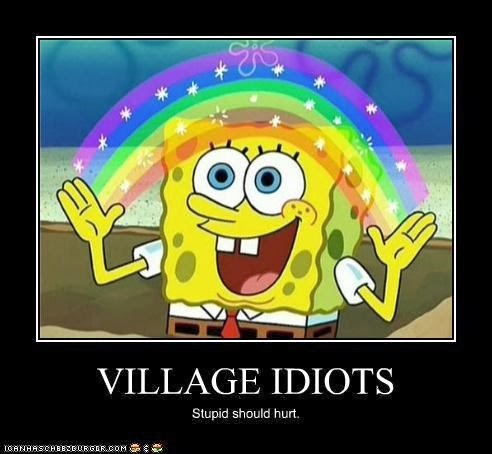 Update: When I checked the e-mail again thinking about doing a reply, I noticed that he had only sent it to the two most liberal people he knows. Maybe he took me off his forward list?? Only about 5-6 years too late!!

Email ThisBlogThis!Share to TwitterShare to FacebookShare to Pinterest
Labels: Fucking Tea-Baggers, The Stupid It Burns Or It Should