Got My Driveshaft Back

On our way out to AZ the last section of the driveshaft fell out. While I was under The Guppy working on that part of the driveshaft I noticed that one of the carrier bearings had some play in it. I could shake it up and down and around. Turned out it wasn't the bearing but the rubber that the bearing was mounted in. As the carrier bearings are pressed on to the shaft that wasn't a job that I could do myself in the RV park. I probably wouldn't be able to do it at home, although I do have a way to press things with a hydraulic jack and a framework. Anywho, it took two weeks, but I got my driveshaft fixed. I found a shop that had a bunch of signs across the front of it and one of the signs said bearings, so I took the driveshaft out and brought it there. 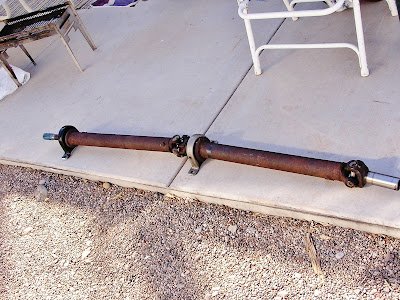 They only had one of the carrier bearings in stock and had to order the other one. That's what took so long. I also had them replace the u-joints on this part of the driveshaft. Now it has all new bearings. Hopefully it will last as long as The Guppy will last. 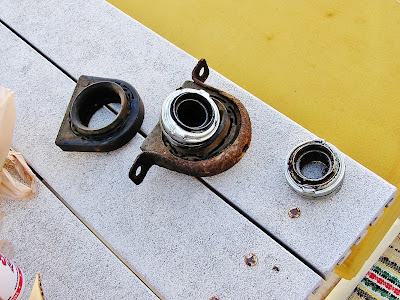 These are the old bearings. I didn't get one of the hangers back, but I don't care. I may or may not have a use for the bearings, but I just wanted to get the old parts back. The u-joints I may be able to use on my old plowtruck if any of the u-joints wear out.

There you go, http://dablogfodder.blogspot.com and http://thefilecabinet.blogspot.com
I put up a post for you guys!!
Posted by Kulkuri at 6:22 PM

Email ThisBlogThis!Share to TwitterShare to FacebookShare to Pinterest
Labels: Bearings, Driveshaft, The Guppy