Interesting Travels With The Guppy

It has been interesting traveling in The Guppy. On the way to Arizona the driveshaft fell out and we had to abandon the tow dolly. But all in all we made it to our destination. On the way back we had different problems. When we took off in AZ I had to jump it started. After I gassed it up it started without a jump. That was the last time it started without a jump. In Grand Junction, CO I bought a new battery. I had hoped to make it home before buying a new battery, but the old one wouldn't hold enough charge to start anymore. 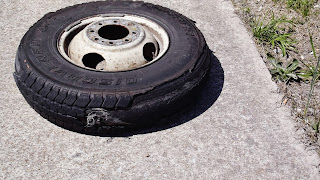 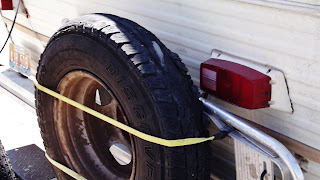 These are the two rear tires from the driver's side. When we got into Missouri I felt a vibration and couldn't figure out if it was the road or a tire. When I on to a different road and the vibration was still there, I stopped at a truck stop and checked the tires. They all had air and the lugs were tight. I got about 5 miles farther and one of the rear tires came apart. Most of the tread came off, but it still was inflated. I had stopped on an uphill stretch so I drove a little farther to where it was more level. I couldn't go much further because someone else was on the shoulder with a flat. Looking back it could have been worse, I could have still been on US-60 with no shoulders, but I was on I-49 which did have a shoulder just barely wide enough for The Guppy. Anywho, I changed the tire while hoping I didn't get run over by the traffic. After I had the spare on we continued on our way. We stopped at a campground that we had kinda planned on for the night. The next day we hit the road again and got about 100 miles when the other driver's side rear tire did the same thing. Most of the tread came off, but it eas still inflated. I didn't want to repeat the previous tire change and didn't have another spare so I drove slowly on the shoulder to the next exit. I stopped at a gas station and asked where I could find a tire shop.

I was told there was a tire shop at the next exit, but I couldn't get there by a side road. I took the tire from the day before in my car and went searching for new tires. At the next exit there was some kind of tire shop (no garage, just a couple of building and a pile of old tires. Nobody was there so I asked st that gas station where I could find another tire shop. I was told there was one 7 miles down the road at the town. I drove there, found the tire shop and they must have been out to lunch also. A guy at the gas station across the street yelled someone would be there in a few minutes. Anywho, the guy had the tires I needed and I got one on the wheel I had with me. Went back and put the new tire on The Guppy and then drove it to the tire shop to get 3 more tires.

The tires were 16 years old and when 2 of them went so close together, I decided to replace all 4. When the second tire let go it did some damage underneath. It tore up a wire bundle that I'll have to figure out what the wires are for when I replace them. It also broke the pipe from the gray water tank. And it ripped the mudflap off. So I will have some work to do before we can use The Guppy.

We purposely avoided Kansas because of our problems going thru Kansas on the way out and turned out Missouri bit us!!

Why does shit happen when you are cruising thru BFE??
Posted by Kulkuri at 11:49 AM