Many years ago when running boards that you could add to a modern truck first came out, I thought they were kinda stupid. I thought at the time if you wanted running boards get an old truck that had them as original equipment. Then as I had a truck that had running boards on it when I bought it and I got used to them. It did make it easier to get up into the truck. After that truck I bought one that didn't have running boards and after a while I started thinking about getting running boards for it. The problem was that getting up into the seat wasn't as easy as when I was younger. If I got my ass up high enough to get on the seat, half the time I hit my head on the top of the door opening. When I mentioned I was looking for running boards to a friend, he said he had some that I could have. Turned out they were the kind I was looking for and the price was right, FREE!!

Then it was just a matter of figuring out how to mount them on my truck as there wasn't a mounting kit with them. Thought I could bolt angle iron to the frame, but then I needed something to support the angle out closer to where the running board would be. Was thinking of doing a strap from the angle to the body, but then thought maybe a long bolt would work and sure enough that worked. 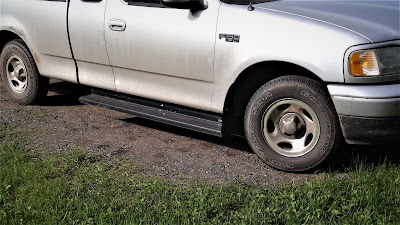 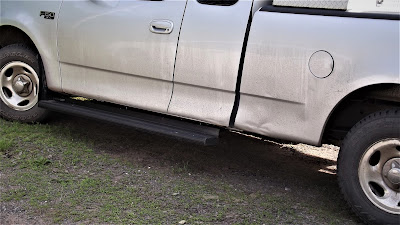 Now I can step up on the running board and sit down on the seat, no more hitting my head on the door opening.
Posted by Kulkuri at 10:40 PM