We spent September as campground hosts at Pictured Rocks Lakeshore. Of the three sets of hosts we were the only ones to stay the full month. Another campground host disappeared sometime in the middle of the month. The gale coming off the lake may have had something to do with the decision to split. The couple at the lighthouse left after the solar system went down and the generator wouldn't work so they had no heat or water. Can't really blame them, they were from Florida.

We had interesting times staying at a primitive campsite for an entire month. I bought a set of solar panels last spring. I had set them up at home, but there really wasn't much of a load on the battery, all that was drawing power from the battery was the radio playing 24/7. At the campground it was different, the site was wooded with little direct sunlight. After about a week and a half the RV battery went dead. On our day off I took the battery home and let my boat battery running the RV. Basically it was the refrigerator running on propane, but it still needed a battery keep the gas valve open etc. When I checked the battery at home with my hydrometer, it was totally flat. The hydrometer didn't even wiggle when filled with electrolyte from a cell. After about 24 hours the battery was about half-charged. When we got back to the RV the boat battery was dead and the refrigerator wasn't working.

After almost three weeks I came to the conclusion that the problem was the refrigerator. That was the only thing drawing power and causing the battery to go dead. Also we heard a strange noise coming from the refrigerator. We shut off the refrigerator and bought some ice for it. After we shut it off we didn't have anymore problems with the battery going dead. (I had tried testing to see how much of amperage draw there was on the different circuits. They all had marginal draw when I tested each circuit one at a time. The circuit for the refrigerator checked out OK, but it looks like I would have had to be checking it for a long time to see when the amperage spiked.

After we got home I used an extension cord to run power to the RV and we turned on the frig. After a day the water bottles we put in the freezer were solid ice, so it looks like we can still use it when we are plugged into 110. If we get a couple of warm days I'll see if it will work on propane again. There are two settings for running the frig. One is the normal position (the one we weren't using) and the other has a heater to get rid of condensation (that was the position it was on the whole time until we turned it off). I hadn't used the normal position because when I would put the switch on normal the light in the frig didn't come on. It always did in the heater position.

Because of the battery drain we didn't use the furnace much when it got colder. We bought a Buddy Heater to use instead. 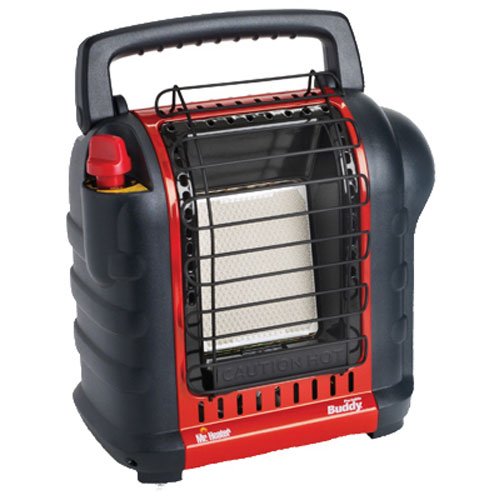 It worked pretty good, we had a few mornings where the outside temp was in the 30s and inside in the 40s. It didn't take long to make it bearable in the RV. I had several little bottles of propane along to use with my BBQ grill, but used them all with the Buddy Heater. I also had an adapter along that I could use to refill the little propane bottles from a 20lb tank. I did have to fill a couple and used one.
Posted by Kulkuri at 12:22 PM