English Is My Second Language, BUT

I seem to have a better comprehension of the language than a lot of people that learned English at their mother's knee, so to speak, and it is their only language. A couple days ago one of the people on my friend list on facebook put up a graphic from a Reich-WingNut site.

So I left a comment:  If the economy works for everyone, everyone that is able will be working!! The way it is now the economy only works for those at the top. But thanks for doing their dirty work for them, they are laughing all the way to the bank because they don't even have to pay you to do it.

I will admit the last part was a bit snarky, but bullshit like this kinda pisses me off. Then someone else commented:  Sorry you feel that way, I have always found work satisfying and while money in the bank is comforting, the labor of your hands and mind is much more so. 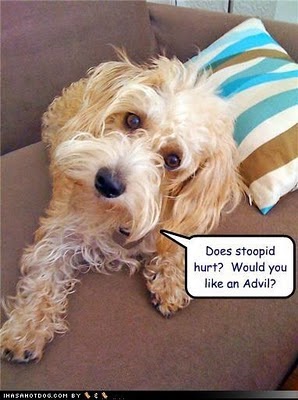 Now this made it sound like I was against working or maybe thought working wasn't worth while or some fucking thing. Anywho, it was just fucking stupid. So I commented back with: Whatever gave you the idea I'm against working. I'm only against working against your own interest and others that have to work for a living by spreading the propaganda of the rich elites.

The only thing I can figure is people only see what they want to see that agrees with them. If someone puts up something contradictory, their mind supplies something that coincides with their point of view. Smarter people than I have tried to figure out the minds of those on the right and failed, so I won't overtax my brain with trying to figure this out.

My cousin who unfriended me a couple years ago also commented on how I only worked when I had no other choice. WTF? Is there any other reason people work for wages?

It is true my work history has a lot of gaps in it that I call "Quality Time," but that's another story.