Who cares what color Santa is?

When I was a kid, I had a more confounding question -- was he even human?

Lately there is a big to-do about what color is Santa. When I was a kid, I was told that Christmas presents were delivered by Joulupukki, a Christmas goat. This is a tradition in Finland and Scandinavia. But then at school I would hear different stories about who delivers the presents.

What color Santa is or isn't is small potatoes compared to the confusion in my head when I was a little kid. 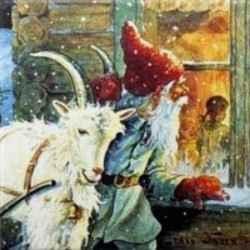 Joulupukki is a Finnish Christmas figure. The name "Joulupukki" literally means "Christmas Goat" or "Yule Goat" in Finnish; the word pukki comes from the Teutonic root bock, which is a cognate of the English "buck", "Puck", and means "billy-goat". An old Scandinavian custom, the figure eventually became more or less conflated with Santa Claus.

It was the guy below, Santa. Now Santa was easier to believe in than the goat, but still it was confusing to a kid. The cross-cultural shit can be difficult at times, especially if you are still learning the English language at the time. In recent years Joulupukki has morphed into more of a Father Christmas figure, but for most in Finland he is still Joulupukki.