Trials And Tribulations Of The Guppy 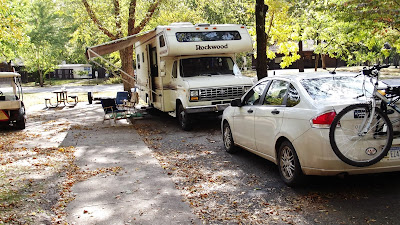 Before leaving I was able to fix a couple of things. I replaced the black water holding tank because the old one melted on our way home last Spring. I also changed the filter in the transmission. The transmission was leaking and I figured it was the pan gasket. A new gasket comes with the filter and the kit was only 8 bucks. Besides at 75K I figured it was due for a filter change. The old filter wasn't bad, a little bit of stuff in the screen, but not enough to be a problem. I straightened out the pan and flattened out the bolt holes, that fixed the leak. It had leaked over 3 quarts of fluid while parked over the summer. There were other things I wanted to do, but finances and time were an issue.

While we were on the road we lost one of the roof vent covers. We were cruising on the interstate and I noticed it looked like the roof vent was open looking at the shadow of The Guppy. The Old Lady got up and tried to close it. The mechanism was closed but the cover was up. After a while it left the vehicle. As it wasn't raining, I figured it would be all right until we got to The Kid's place and I could get another vent cover from a RV dealer. When we got to The Kid's place it was raining, so I covered the opening with some plastic and got a new cover the next day.

I wanted to replace the charger that runs the 12v lights and stuff and charges the RV battery, but that was one of the things that got put on hold. Sometime after we get home I'll replace the charger. It puts out too high a voltage (about 17v) and won't shut down or go into float mode. It is burning out the lights and in order to play the radio I installed last year, we have to turn on a couple of lights. If I kill the AC power, the radio plays fine without any lights on or anything else drawing 12v power.

Last week when the propane tank ran dry the water heater was on and it would ignite and run for only a short time and stop. Then it would cycle and burn again for less than a minute. I checked the tank and the guage was above the halfway mark, but when I tried to light a burner on the stove, there was no gas. I hooked up a 20lb tank and tried the water heater again with the same results. I kept trying the water heater several times over the next few days and finally it is working again. The only thing I can think of is there is some water in propane and maybe some got into the nozzle on the water heater burner and it took numerous times of lighting the burner before it was gone. For awhile I thought we'd have to replace the control valve for the water heater.

Gas mileage still sucks. I'm going to replace the fuel filter before we head home and see if that'll help. I took the K&N air filter (it's the same size) from my pickup and put it in The Guppy thinking that might improve the mileage, but it didn't help, still sucks.
Posted by Kulkuri at 11:04 AM

Email ThisBlogThis!Share to TwitterShare to FacebookShare to Pinterest
Labels: K&N Filter, The Guppy