Yesterday we drove two hours to Trenary. They were having the Twenty-Turd shithouse races. We had heard about and seen pictures &videos of previous years events. Yesterday was a nice day (got up in the 40s and partly sunny, almost t-shirt weather) so we decided to go and also do some shopping on the way back.

Usually road crews will try and remove all snow and ice from the roads and streets. There are a few occasions when they will put snow on the streets. UP on the Tundra we have a couple sled dog races and the shithouse races.

I managed to get photos of most of the entries. I think I only missed one because my camera went to sleep. 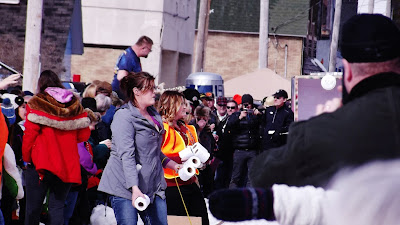 Before the races began they came down the track tossing out rolls of toilet paper, I guess in case some had to go??

Don't know why, but the races were scheduled to start at 2pm. After about 20 minutes I was muttering, "It's time to get this shit on the road!!" Finally around 2:30 it began. 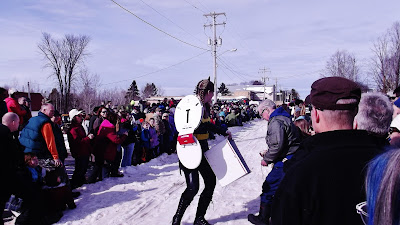 Not sure what the hell Batgirl was doing there. But she came down the track as you can see in this pic.

About halfway thru the races they had a couple of snowmobiles groom the track. The Old Lady said that this was one good use for old pallets, not like some of the projects they show where you'd end up with a lot of splitters if you tried doing them. 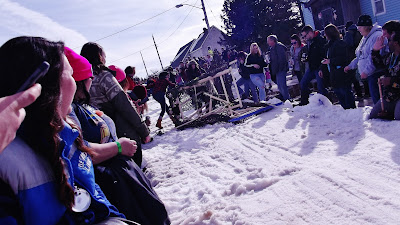 This one fell apart about a third of the way down the track, but like true troopers they dragged it to the finish line!! 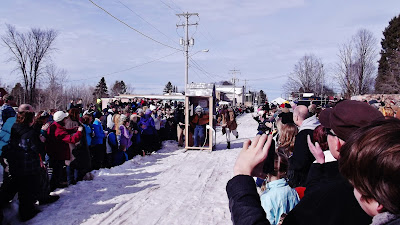 Only one had a driver and he was helping propel it Fred Flintstone style!! 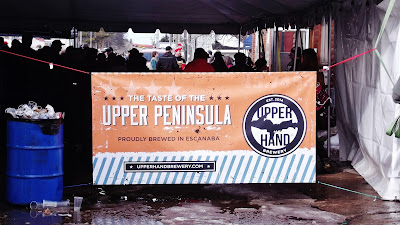 They had a beer tent set up in front of one of the bars. There are two bars side by each!! (That's Yooper talk.) There were several kids making quite a haul picking up the empty beer cans and bottles. A dime apiece adds up pretty quick. Saw a couple kids using a plastic sled to haul their booty.
Posted by Kulkuri at 12:35 PM