Back in December I bought an extended cab pickup. My old truck wouldn't start (still doesn't) and had been acting up for most of the Summer. But that's another story.

One of the things I've always thought was a good idea was that with the extra room behind the seats there would be a place to set stuff, like groceries, whatever. Problem is that with grocery bags these days if you set a plastic bag on the floor behind the seats, by the time you get home most of the stuff could be out of the bag and rolling around on the floor. In our car we have a laundry basket to put groceries or whatever in to keep the stuff contained. A laundry basket would fit behind the seats but if you need to put the rear seats down, what do you do with the basket?? I think I solved that problem.

I built a couple of boxes to fit under the rear seats. The seats are still usable and the boxes will contain the stuff in grocery bags or any loose stuff. I also added a net to the front of it that can be used for miscellaneous small stuff. I bought the net at St. Vinnie's several years ago and now finally have a use for it. I put one like it in The Guppy, but haven't put anything in it yet. 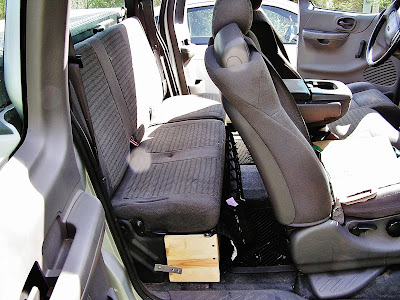 The boxes don't interfere with the seats. They can be put down and there is still as much leg room (??) as before. Also, as The Old Lady pointed out after I showed her how it would look with the seats down, we could put stuff under the seat and with the seat down it would be hidden from view!!

My next project on the interior will be new seat covers for the front seats. Not sure if I will do the rear seats as I don't see them being used much. The front seats have some burn holes in them because the previous owner was a smoker. Plus with 230K miles on it the driver's seat is kinda frayed on the edge.
Posted by Kulkuri at 11:38 AM