In the summer months we use a washing machine that sits outside. The water coming out of the ground is fairly cold. I thought it was 40 something degrees but when I used a thermometer it was about 50 degrees. 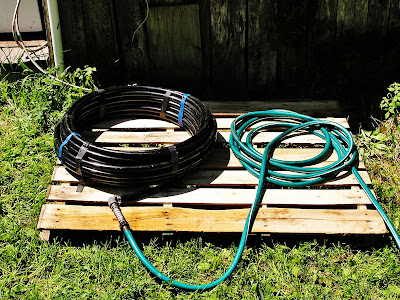 I had a coil of 3/4 inch plastic pipe, so I thought maybe I could use that to make a solar collector to heat the water before it goes in the washing machine. I thought I could just connect the garden hose to the pipe fittings I put on each end of the plastic pipe. One worked but the other leaked. I needed a better way to hook up the garden hose. 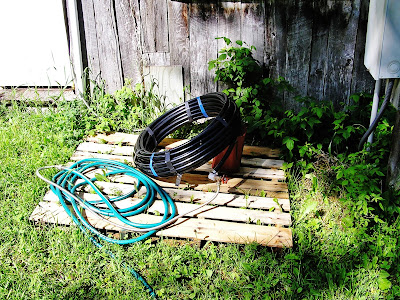 I put a hose bib valve on the fitting on the plastic pipe and used a washing machine hose to connect the garden hose to the hose bib. When we tried it out it did raise the temp some, but not as much as I had hoped. Part of the problem is there is a tree that shades the place I have the solar collector. It did raise the temp about 20 degrees, which is an improvement. Maybe if we had waited a little longer it would have been totally in the sun and would have been warmer.

The best part of this is I didn't have to buy anything to set this up. I had all the parts needed already, just had to round them up and put it together.
Posted by Kulkuri at 11:53 AM