Found The Cause Of The Smell

Last December I bought another truck, a 2001 F-150 extended cab. It had several problems. First thing I did was have the windshield replaced. A couple months ago I replaced all the ball joints on the front end. Last month I got and replace a parking brake cable. It is kinda weird setup. The cable from the left rear wheel hooks into a metal piece and the housing for the other brake cable goes into the piece and the cable goes forward and hooks on to the cable from the brake pedal in the cab. I got the new cable routed and installed. Tried out the parking brake and all it did was tighten the cable without applying the brakes. The next day I took out the parking brake pedal assembly and found the cable had slipped. Instead of going up and over, it was along side of where it should be. After I routed the cable properly the parking brake worked, but only for one wheel. I figured I'd look into adjusting the brake that wasn't working later. The other day we went somewhere with the truck and when we stopped after 15-20 miles there was an annoying smell. It smelled like either a clutch burning up or a brake hungup. After we got to where we were going I checked the wheels and found the right rear was hot while the others were warm. Whatever it was, it wasn't causing a drag on the truck, just the bad odor. I couldn't do anything about it then in any case, so we continued on, did what we had planned and then went home. Yesterday I took the wheel off and removed the caliper. Had some trouble getting the rotor off and it probably hadn't been off since the truck was built 15 years ago. Sprayed penetrating oil in the crack between the rotor and the axle and after some time I was able to get the rotor off. What I found was the the linings for the parking brake shoes had fallen apart. Found one piece several inches long and a bunch of pieces no bigger than a half inch. 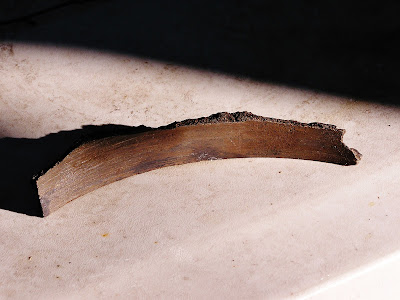 This piece is about 5 inches long and the rest were just small pieces. I think some of the small pieces got jammed between the shoe and the rotor. Not enough to slow the wheel, just enough for friction to heat the assembly and cause the stink!!

This shows the cable setup that had me confused when the longer cable was missing.
Posted by Kulkuri at 11:31 AM