Last year I changed the black water tank in The Guppy. When I put the new tank up into place I couldn't see if the vent pipe was in the vent fitting properly. I knew the waste pipe from the toilet was in place right as I put it in from above. We would occasionally experience a smell from the holding tank. Last week I decided to see if I could see the vent pipe connection to the tank from above. 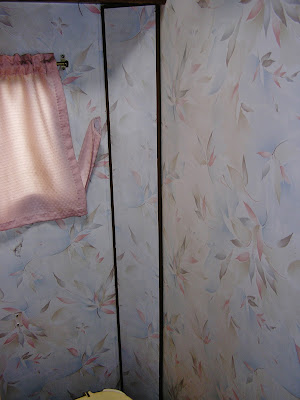 There is this panel in the corner of the bathroom and I figured it was hiding the vent pipe. I was right, when I removed the panel I saw the vent pipe. When I tried to see down to the tank there wasn't a big enough gap in the floor to see down to the tank. I used a hole saw to cut a hole in the plywood between the toilet and the vent pipe. Even then I had trouble seeing what I wanted to see. I tried getting the pipe into the fitting with no success. I cut the plywood from the hole out to the edge and cut the pipe so I could pull the pipe out and see what the fitting looked like. The pipe had been off by half an inch or so and had flattened out part of the fitting. I cut a chunk of pvc pipe about 4-5 inches long and put it in the fitting to make it round again. Later I was able to get the vent pipe back in the fitting, but it wasn't easy. 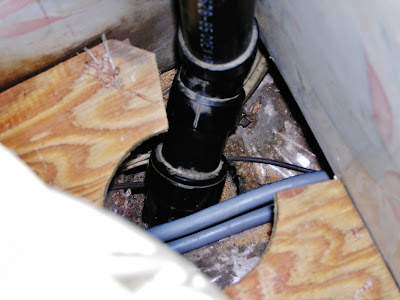 The problem from the git-go was the water lines that are next to the vent pipe. The one on top of the other was clamped along side the other and against the vent pipe.  I figure they pushed the vent pipe over when I removed the old tank and that's why the vent pipe didn't line up with the fitting even tho I had measured carefully before I cut the holes in the new tank for the fittings.

The Old Lady is planning on us spending the winter in The Guppy down in the Southwest, probably AZ. We don't want the shit tank stinking up the place if we are going to be living in The Guppy for several months!!!!!
Posted by Kulkuri at 8:02 PM