Now I'm not gungho, hunglo, esprit de corps and all that shit, BUT I do think if you are going to display the flag, you should do it properly. I don't give a shit about flag burning, we don't need a fucking amendment against flag burning. If you are that pissed and feel you have a bitch against the government, then go ahead and burn the flag to get their attention!!!!

What I object to is people that treat the flag like fucking yard art. They hang the flag and leave it there until it rots without following proper flag etiquette. You don't leave it out in the dark, either shine a light on it or take it in at night. What's with this bullshit of putting a full size flag on the back of your mailbox post??? Or next to a road in the middle of nowhere?? One I've seen appears to be next to a service road for a cellphone tower.

I've noticed a lot of campers will hang a flag as soon as they park in their site. I'd like to know what the fuck is the point of putting out a flag when you are only going to be somewhere for a short time?? Are they afraid someone will accuse them of being furriners?? 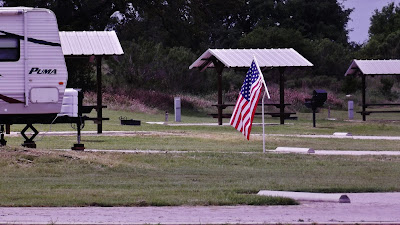 This is typical of most campers. This one was taken at Canyon Lake in Tejas. This one isn't as bad as some I've seen, one that I saw this spring on our way home had a flag hanging off the back of their trailer over the garbage bags!! I guess to show that their garbage was 'Murikan!!

But I think the one that takes the cake is one I've seen lately whenever I go to town. It's in front of a business that's being remodeled.  Needless to say that if the business ever opens, I won't spend a dime in it!! 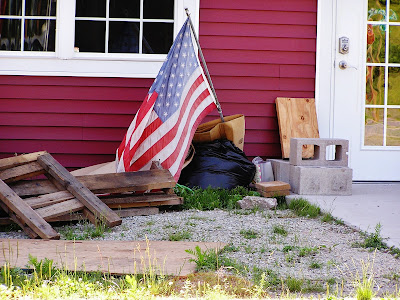 "When the flag is lowered, no part of it should touch the ground or any other object; it should be received by waiting hands and arms. To store the flag it should be folded neatly and ceremoniously.

The flag should be cleaned and mended when necessary.

When a flag is so worn it is no longer fit to serve as a symbol of our country, it should be destroyed by burning in a dignified manner."

I have relatives that are all for a flag burning amendment (said that way it sounds like they are in favor of burning the flag, but then again that is the proper way to dispose of one), but you won't hear a peep out of them about those that treat it like yard art. They probably think it patriotic!!

The ironic thing about this supposed show of PATRIOTISM is that 94% of the flags come from CHINA!! (Google is a wonderful thang!!)
Posted by Kulkuri at 4:20 PM