For the better part of the past decade I have been searching for a static strap. I last found some at a discount store on Cape Cod when I was working there in the late 90s. At the time I bought two and installed one on my car. Later I installed one on another car.

Static straps help prevent shocks when you get out of the car. I think I started looking for a replacement when the one on my car came off. It had a metal end that bolted to the frame and it rusted off. When I got my truck, I got more serious in my search because I had a serious problem with shocks when we lived in Omaha, but every time I asked for one at an auto parts store, either I got a ground strap that goes from the engine to the body or I got a look like I was speaking a foreign language. I was about to start asking in a foreign language(Finnish) when I finally found some that are readily available locally at a reasonable price. I had even asked at RV dealerships as I have seen them on motorhomes.

I had googled static straps and found some online in England, Australia, Hong Kong and the Philippines. Some come with little LED lights or cartoon characters on them. One that may have been in this country, but they wanted $20. Also found that Gates Rubber makes them but they come in lots of 25. Tried the auto parts store online sites, the ones closest to where I live first as I was thinking I'd get them at the store instead of ordering online. Then finally tried NAPA( they are further away and there aren't as many around so didn't think of them right away) and on their website they had them. Then called the local store, but they didn't have any in stock, had to order them from the warehouse. What's waiting a day or so when I have been searching for years?? 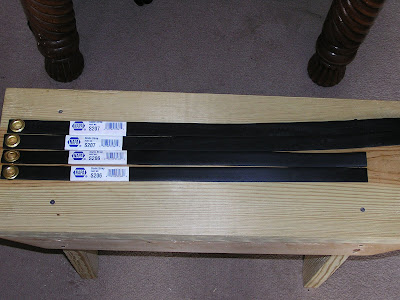 They had two sizes(25 inches and 30 inches) and I got two of each, one for the car, one for the truck and replacements for both. They were $3.29 each. 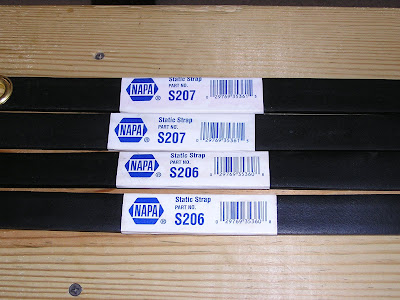 As you can see it says Static Strap right on the label. It's a pain in the ass when you know something is made and doesn't cost a lot, but you can't find it even when you ask for assistance in getting it. 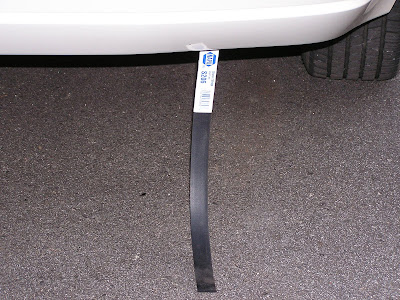 It took awhile to figure out where to attach it to the car, but here it is.
Another note about the car, it has a fly-by-wire throttle like Toyota's. Hopefully it won't be a problem as I haven't heard of any runaway Fords.
UPDATE: The Old Lady drove the car to work and had someone helpfully tell her there was something hanging down at the back of her car!!