Update: After the Storm 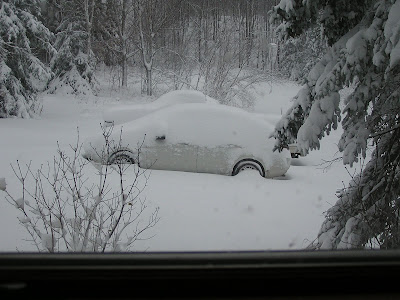 This morning we woke up to over a foot of snow on the ground.  Shortly after we got up the lights went out.  They had gone out several times during the evening yesterday, so it was no surprise.
We lit the kerosene lamp and started melting snow for toilet flushing.  The one drawback of no electricity is the water pump won't run which means no water until the power comes back.
The one thing we didn't have to worry about with the power out was getting cold.  The woodstove puts out plenty of heat, at times too much. 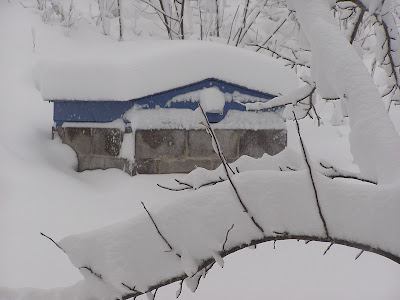 The pumphouse has block walls 3 blocks high and the snow is halfway up the wall.  The ground slopes away from the pumphouse, so this shot shows that we got at least a foot of snow.
Finally got the plow going.  First I had to find where I left the battery.  Then when I got it started, it ran out of gas.  Thought about asking the neighbor to plow us out, but found out he wasn't home.  Didn't have any gas as I hadn't filled my gas cans.  Fired up my other old truck and parked it in the field out of the way, siphoned out 5 gal of gas and put it in the Jeep.  Then I had to drive it to where the plow was and hook up the plow.  After all that I was able to plow the driveway.  We paid the county road commission to plow out driveway, but they don't plow private drives until the road freezes.  That's one of the reason I bought this old Jeep and worked on fixing it up so I could plow with it.
Posted by Kulkuri at 6:44 PM

Email ThisBlogThis!Share to TwitterShare to FacebookShare to Pinterest
Labels: Jeep, Kerosene Lamp, The Joys of Living UP on the Tundra