Want to Watch Live Streaming of the Olympics?? You're Shit Out of Luck Unless You Already Have Cable or Satellite!!

Squatlo had been bitching about NBCs coverage of the Olympics and with good reason from what I remember watching the previous Olympics that NBC did.

Below are some FAQs about accessing the live streaming. 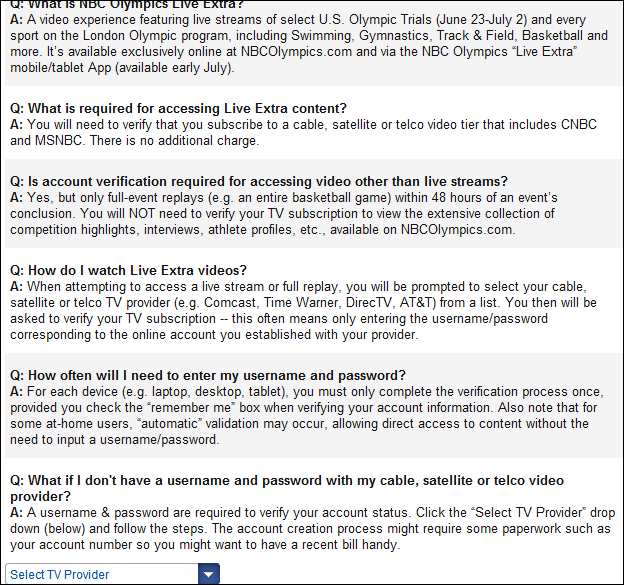 These clips are from the page at nbcolympics.com. 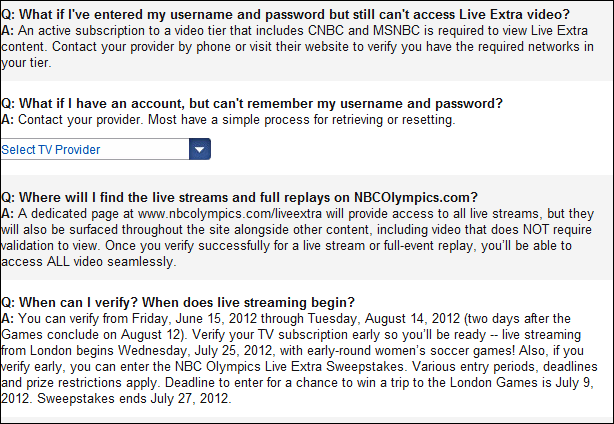 It's not enough to have cable or satellite, you have to have CNBC and MSNBC in your subscription package to watch all the events!!

NBC and TNT do the same thing for watching online some of  their shows. Had to find a pirated link to watch "Falling Skies".  Missed the last season of "Chuck" because we no longer had cable. We still aren't able to watch the missed episodes of "Chuck" at NBC.com or Hulu even tho the series has ended. Why don't they just let people watch online??  That way they get more eyeballs watching their shows and because they usually run commercials during the online shows, what's the difference??

Back when we had cable, we didn't have to go thru network websites to watch shows. We could access them with our cable account. Going to NBC or TNT would have just added a bullshit useless step to the process!!
Posted by Kulkuri at 11:09 AM