A lot of bible-bangers are talking about now that gay marriage is legal that ministers will be forced to officiate gay weddings. Who is going to hold the shotgun to the minister's head?? In traditional "shotgun weddings" the shotgun is held on the groom to make him get married, it has never been about forcing the minister by using the threat of a shotgun!! 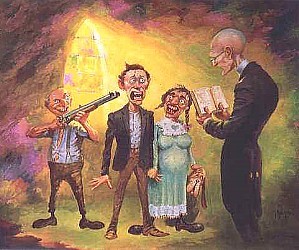 Actually, ministers (or whatever form of clergy, pastor, priest, rabbi, etc....) have refused to do weddings for any number of reasons. At one time some would refuse to marry interracial couples (willing to bet there are still some that would not do an interracial wedding!!) Some won't do interfaith weddings, some won't marry someone that has had one or more divorces, etc...

A Sister-in-law was told by a minister that he wouldn't do their wedding because she and her husband-to-be hadn't given any money to the "new carpet fund" for the church and/or parsonage!! So if a minister can refuse for such a bullshit reason, WHAT THE FUCK makes anyone think they would be forced to do gay weddings?????????????

Hearing reports about some officials in various states that are not issuing marriage licenses. In one county in Alabama the judge (I guess the local judge has the final say on marriage licenses in Alabama) won't issue any marriage licenses to anybody, straight or gay. On that I just have this to say: IF YOUR RELIGIOUS BELIEFS PREVENT YOU FROM DOING YOUR JOB, GET A DIFFERENT FUCKING JOB!!!!

That applies to all categories of jobs, pharmacists, clerks, judges, what the fuck ever!!

While the First Amendment guarantees freedom of  religion, we need to get to the point where it GUARANTEES FREEDOM FROM RELIGION!!!!
Posted by Kulkuri at 10:44 AM