For the better part of last year we talked about getting a new flat screen TV.  We wanted a flat screen TV so we could hang it on the wall in the cabin UP on the Tundra.  The place is small and by hanging the TV on the wall it would take up less space than the old style TV.  I was all set to wait until we went back UP on the Tundra around Memorial Day, but before Xmas The Old Lady started talking about us getting a new TV after the beginning of the year.  So I decided if we are going to get one here, I may as well get one in time for something worth watching on a widescreen HDTV(32" isn't really widescreen, but both the apartment here and the cabin are small), I got one the day before the Super Bowl. 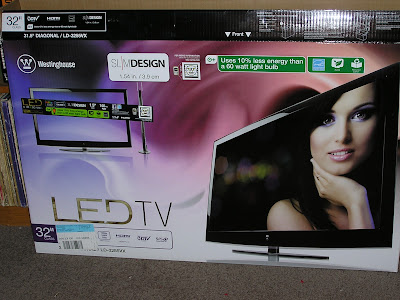 While setting it up, I noticed something, it came with a hole in the base and a screw to fasten it to what it was sitting on to keep it from falling over because the tall skinny TV if not all that stable.

At first it looked a little better than the old 20" TV, but not the spectacular picture all the HDTV ads promised.  The picture was a little sharper and could see all of the picture without the sides being cut off (16x9 picture size vs 4x3).  Then the other week while wandering around on my daily walk, I saw a good deal on a HDMI cable.  I've read in the paper and seen stuff on-line about having to get new cables for the new HDTVs, but I thought why do you need the new cables when you already have the RF (coax) hookups??  After hooking up the HDMI cable from the cable box to the TV, I found out there is a difference.  The cable box puts out different signals, the coax signal is only 480i, the same whether on the regular channels or the HD channels.  With the HDMI cable the signal for HD channels is 720p and that makes a big difference in picture quality.  Live and learn!!

Just for the hell of it, a couple weeks ago I hooked up a set of rabbit ears to the new TV.  The channel search found over 60 channels, a handful of duplicates (a half dozen or so broadcasting the same stuff on two different channels) and a couple with a signal but no programming.  Some of the over-the-air channels are broadcasting in 1080i.  When I tried a channel search with a converter box the other year, I only found about a dozen channels and half of those were BibleBangers.  It may be there have been more channels added since then or the tuner in the new TV is more sensitive than the one in the converter box.  I'm looking forward to taking the new TV UP on the Tundra and see if it works better than the boxes.  There is one channel that I wasn't able to get with the converter box and I would like to be able to get it for their local news & weather.
Posted by Kulkuri at 11:24 AM

Email ThisBlogThis!Share to TwitterShare to FacebookShare to Pinterest
Labels: HDMI, HDTV, UP on the Tundra