This morning the power was out.  The Old Lady was up first and she called the Toll-free number to report the outage because it was only a little after 6am.  The person on the other end had a southern accent, so The Old Lady didn't think she was local!! 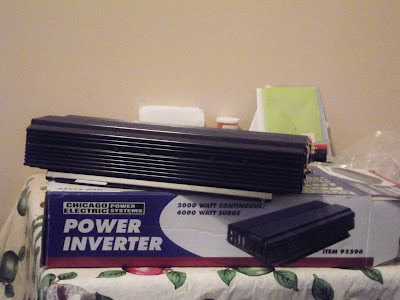 After I got up, I thought about the fact that last year I bought a power inverter.  Thought now might be a good time to try it out and be able to have my morning coffee.  When I mentioned the power inverter, The Old Lady said I could use it to run the refrigerator.  Different priorities I guess!! 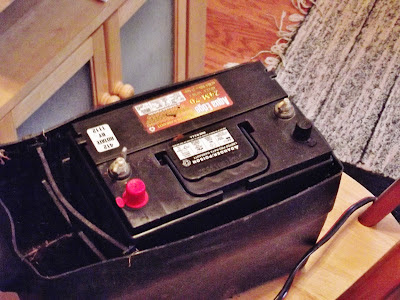 Went looking for the inverter and found it buried in the storage shed, dug it out and got my boat battery.  Looked for some wire and thought I'd found some that would work judging be the thickness of it.  Hauled the stuff to the house and started to hook things up.  The wires were from an old ohm meter and while the outside was fairly thick the wire inside the insulation was very puny.  It was all insulation and only a few strands of wire.  Went looking for wire that would work while muttering about how I know I've bought spools of wire in the past, but where the fuck could all that wire be?? Having lived in several places in the last decade and having had stuff here and there, it could be in any number of places. Probably in the storage unit we are renting in town. Finally found some wire heavy enough to handle the current from the battery to the inverter and started clearing out next to the frig to set it up to power the frig and had an extension cord to run to the coffeepot. Had just discovered that I would have a helluva time getting at the cord for the frig when the power came back on.

One of the things about living in the country is that when the power is out, you only have a limited amount of water, what is in the tank.  Without power to run the waterpump, you don't have water.  When hurricane Bob hit Cape Cod in '91 I was still able to take showers after the power went out because we had city water and a gas water heater.

Later today we will be making a Menard's run and have added what we need to hook up the battery to the inverter to the list.
Posted by Kulkuri at 10:49 AM