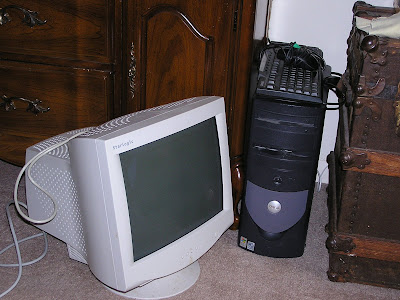 Here is the old confuser. We took the CPU to Geek Squad and without going thru a complete diagnosis (just plugged it in and looked at what it did) the off-the-cuff verdict was that the hard drive was shot. I'm going to look around and see if I can find another hard drive at a reasonable price and see if I can't fix it. 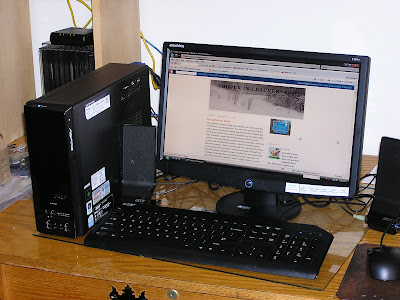 Here is the new confuser. The Old Lady has been lusting after a flat screen monitor for years. She couldn't bring herself to get one as long as the old monitor still worked. When we went shopping for a new confuser, we saw this offered as a package deal. For only $70 more than the CPU, it had the flat screen monitor and a printer. They didn't have the printer in stock, so they knocked some off the deal and if we go back before the end of the month, we can get the printer for what they knocked off the deal. The CPU is only about one fourth the size of the old one. After the Geek Squad dude showed me how to open the old CPU, I saw that most of the inside is empty space (air, sailboat fuel).

Email ThisBlogThis!Share to TwitterShare to FacebookShare to Pinterest
Labels: Confusers, Dead And Otherwise