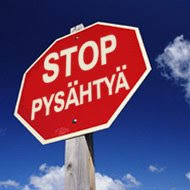 There is a humorous satire in The Hammer, a Canadian humor and satire site. It is supposedly about how the Finns are taking over Nova Scotia.
"Most of Nova Scotia's Stop signs are now bilingual English/Finnish, yet another example of the creeping Finnish dominance of the Maritime provinces, according to Howard Bigotron of the Anti-Finland League"

"The Anti-Finland League, an obscure yet controversial Toronto-based pressure group which claims a Canadian membership of six, has been lobbying federal, provincial and municipal representatives to curtail the Finnish influence in Canada for 24 years."

Even non-Finns will find this funny!! H/T to Migrant Tales for the link.