Snow UP on the Tundra 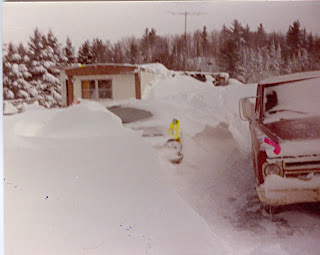 Last weekend it snowed UP on the tundra and by the time it ended they had a foot of snow. These pictures are from about 30 years ago. Next to the pickup buried in the snowdrift is a '62 Mercury Meteor. The kids were able to walk on the snowdrift up on to the roof of the mobile home. 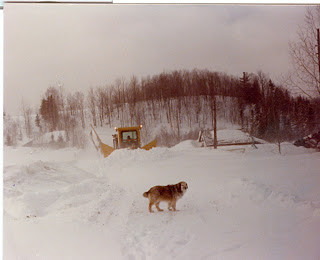 The dog in the picture is Banjo. She lived outside most of the time. The only time she wanted in

was during thunderstorms. Then she would come in and hide under the kid's bed. One time there 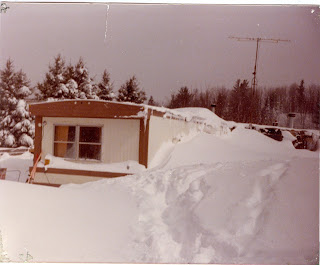 was no room under the bed and she went under the couch. I had to lift the couch up so she could get out.

These pictures are typical of what it was like in the middle of Winter back then. This may be what we have to look forward to in the future. The Old Lady says that this is the only place we can afford to retire to. But, hey it's not that bad anymore thanks to global warming!!

The trailer is no longer there, I tore it down a couple of years ago. I may have to build the retirement bunker where it sat.