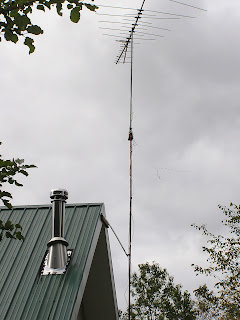 This photo shows the antenna as it looked summer of 2010.  I was only able to get two channels(5 AND 13) that totaled to 5 because channel 5 had two, CW and ABC and channel 13 had 3 PBS.  Those were my choices ever since the switch to digital in 2009.  First I was able to get channel 13 and a couple of months later channel 5 was there. 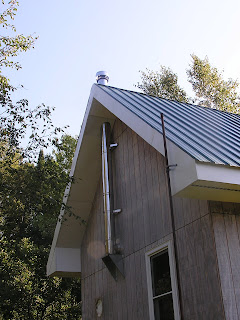 Last June the antenna blew down one morning.  I didn't think to get a picture of it, was too busy taking it apart so it wouldn't cause damage to the house like breaking the window.

As we were planning living here permanently we had the landline and intratubes hooked up already.  At that time we still had cable in Hot-Lanta so I was able to watch TV shows online thru the cable website and we had Netflix.  I also had checked out Hulu(Hulu has shows from ABC, NBC, and Fox, but not CBS.  I get CBS shows from their website.) when I heard about it about a year before.  So I had many more options after the antenna blew down than I did with the antenna.  The only thing I missed was some of the live stuff like NFL football and NASCAR.( Altho, with only those channels available, I wouldn't have been able to watch NFL football or NASCAR  anyway, other than a couple races later in the year on ABC.)   Then last Fall heard about a site that does sports and was able to watch some football and NBC would live-stream their Sunday Night Football, including the Super Bowl. 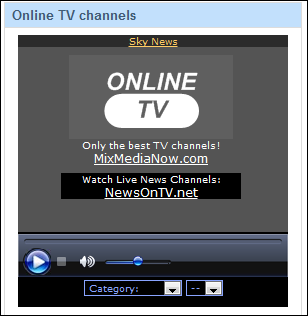 Then there was this on iGoogle.  When I clicked on it I was able to find many shows that were being streamed by people and put on the intratubes.  Some of them would have chat sessions along side of the show that was streaming and occasionally someone would put up a URL for another link for watching that type of show.  There's something called JustinTV that has a half dozen categories with dozens and dozens of choices.  Some involve someone using their web camera or iPhone to broadcast, but a lot are from various networks.

The biggest trouble with using these sites to watch NASCAR is that they would get shut down by the network and I would have to find another link.  Usually there is another link readily available, but some times I have to wait awhile before I can find another one.  Lately I've found an European site(last Fall I found one for football[ESPN America] that was from Europe) to watch NASCAR and it seemed better than the ones I've used before.  Yesterday I only had to change links a couple of times to watch the race.
Posted by Kulkuri at 10:38 AM