Funny how things go. Yesterday I had an idea for a post that had nothing to do with politics but when I saw a comment on my post from the day before, I did a post as a reply to the comment and then did another as a follow-up. What set me off was the phrase "blind hatred", when in reality my eyes have been wide open and is the cause of my hatred of the FuckingRepublican Party!! Today I will add some more to those posts.

At the time I thought Nixon was an aberration, turns out he was the norm. As a matter of fact the current crop in his party has almost completely rehabilitated him. Not that anything about what Nixon did has changed or is seen in a better light, but that what has happened since his time by the leaders of his party is so much worse. At least Nixon did a few good things for this country like signed the law creating the EPA, which his party ever since has tried to destroy. He also signed the law for Earned Income Tax Credit for low income workers, and again his party has tried to kill it and failing that his party in Congress has funded and instructed the IRS to concentrate their audits to those claiming EITC instead of going after the large tax cheats.

As for the current crop (which I like to refer to as the Newt Gingrich Era [1994-Present]) they have spent their time working to make life harder for those on the lower end of the income scale and rewarding the Uber-Rich and Mega-Corporations (you know that Military Industry Complex that Ike warned us about) are the ones receiving largesse from the government coffers. Of course if they think that government is the problem, then they have no qualms about stealing from the government. They are constantly punishing the poor and rewarding the rich.

They claim they are strong on defense when in reality they are strong in their support of the defense contractors. An example would be the aircraft carrier that Trent Lott pushed thru against the wishes of the Navy because it would be built in his state. Another, after the Iraq War started and they wanted to retain people in the military, aWol only wanted the officers to get a pay raise to keep pilots from going to civilian flying jobs. They just don't give a shit about the troops, which has me scratching my ass why the VFW and American Legion still support them and invite them to speak at their conventions. (That's why I won't join. )

The cartoon below pretty much sums up my feelings. There is one exception, I am all in favor of the plan I've heard about in recent years to put up statues of St. Ronnie in every county in the country. As long as it is privately funded, I am whole-heartedly in favor of it. If they do put up one in front of the courthouse in every county, it will be a short trip to take the children and grandchildren to show them the person that FUCKED us!! While we are at it we need to change the name of the airport in DC back to Washington National Airport. When they pushed the name change thru saying it wasn't named for a president yet, my thought was WHAT THE FUCK??? It was named for George Washington -- the architect who planned the original terminal even used Mount Vernon as an inspiration for his design. It was an insult to the flying public and those that work in the aviation industry after what St. Ronnie did to the air traffic controllers. 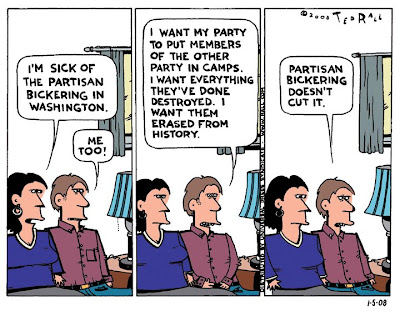 I can't understand why anyone would support such a treasonous party.