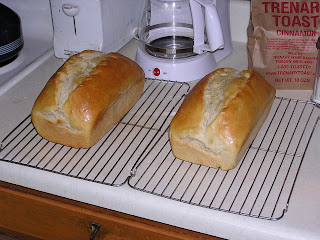 This is a picture of the sourdough bread that I baked the other week. It took me more than a dozen tries to get a sourdough starter using only flour and water. My early attempts were using a Mason jar and I didn't have any luck. The last attempt I used a mixing bowl and was successful. I guess it needed a larger surface area to work. 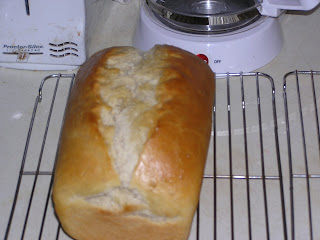 I created the starter while UP on the tundra and was able to transport it down to the land of Kudzu in a cooler with no problems. It is happily living in a Mason jar in the back of the fridge. Once a week, I either make bread or feed it half a cup of flour and half a cup of warm water. You are supposed to throw half a cup of starter away when you feed it, but I don't because I want more starter so I can do two loaves at a time instead of one. After going thru the trouble of making a starter, the Old Lady said, I don't know why you bothered with that because I don't like sourdough bread. I just like the idea of making bread without buying yeast and it isn't a real sour sourdough. Also I just wanted to see if I could do it and I was able to create a sourdough starter from scratch. Maybe it will get more sour as it gets older but for now it has a sour smell in the jar and when I proof it but the bread has very little sour smell or taste.
Posted by Kulkuri at 11:01 AM