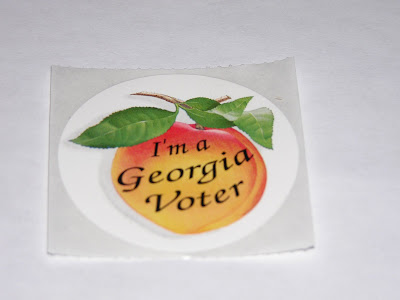 The Old Lady and I went and voted yesterday. It took most of the afternoon, but now we are done with it. We figured even tho it took over 2 hours it was worth it as on Election Day it may take longer. What was funny was the way the line went to finally get to the voting machines. As we entered the building a voting worker handed each person a form to fill out to vote absentee. This was actually early voting, but the forms haven't been changed yet. We were shown into a large room where the line snaked back and forth several times and while in this line we filled out the form and a worker came and checked our ID's and noted it on the form. The line went back to the door we entered. When we reached the door, we were motioned thru the entryway thru another door into another part of the building. Slowly we moved down a long hallway and when we got to the end, we went thru another doorway into a long, skinny room where the line went down one side of the room, across the end and back down the room. Another door and another hallway at the end of which we finally got into the room where the voting machines were at. A short line and then up to the counter to turn in the form to receive the card for the voting machine. As for voting, no name with R next to it got my vote, and I had to vote Libertarian for one office. It looks like the R's couldn't find anyone brave enough to run for Congress in my district as the incumbent was unopposed. We also got to vote Yes on No on several proposals. Then it was give the card to a worker and out a side door to figure out how to get back to where we parked.
Posted by Kulkuri at 10:36 AM

Email ThisBlogThis!Share to TwitterShare to FacebookShare to Pinterest
Labels: Voting