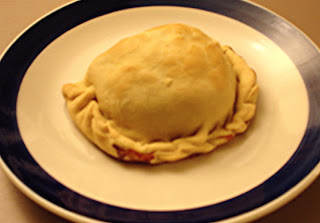 Had a comment on my blog that mentioned pasty ( rhymes with nasty not hasty) and I thought I'd do a post on my favorite food. I googled pasty and found a lot info on pasties including this about someone who thought the Economist magazine had made a mistake and dropped the r from pastries. The comments section of that post shows that pasties are not a local phenomena but are available in various places around the world.

The ingredients in a pasty vary but I prefer meat (beef and pork or all beef or even venison), potato, rutabaga, and onion wrapped in a crust and baked. The crust can be a pie crust or there are also pasty crust recipes. One time the Old Lady was talking about pasties with a grad student from the UK and mentioned rutabagas in pasties and the grad student said, "You put
Swedes in your pasties?" In the UK, rutabagas or yellow turnips are called Swedes or Swedish turnips.

Unless I am back UP on the tundra in Yooperland where places that sell pasties are as common as doughnut shops on Cape Cod, I have to make my own pasties. And I mean I have to make the pasties. Over thirty years ago, I decided to try my hand at making pasties after having baked a couple of pies. Anywho, the pasties turned out pretty good, so good that the Old Lady said since your pasties are better than mine you can make them from now on. So for the last 30+ years when we have pasties, we either bought some or I made them.

And for those who think pasty rhymes with hasty, those are nipple coverings and generally not edible.
Posted by Kulkuri at 1:55 PM

Email ThisBlogThis!Share to TwitterShare to FacebookShare to Pinterest
Labels: Pasty