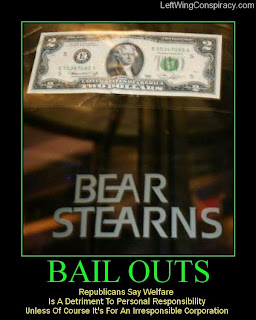 What's interesting is that whenever aWol the Conspirator in Chief goes on TV to reassure the public about this financial mess, the Stock Market takes a dive.

What I find extremely disgusting is that for decades these Free Marketeers have called anything that would help the average person Socialism. Now when we will be on the hook for over a Trillion $$, it's all good. Over 100 billion for AIG, over 300 billion for Fannie and Freddie, and over 700 billion to bail out the banks and Wall Street. As Sen. Dirkson used to say, "A billion here and a billion there, sooner or later it adds up to real money". This is the biggest example of Socialism that this planet has ever seen and all the talking heads are saying it needs to be done. This is just Socialized Kapitalism. And they scream bloody murder when someone gets a $100 or $200 in Food Stamps.

It's time to get rid of these Robin Hoods in Reverse, they take from the poor and give to the rich. I've been saying to years that I can't afford another tax cut because all the local taxes and fees go up.
Posted by Kulkuri at 9:33 AM